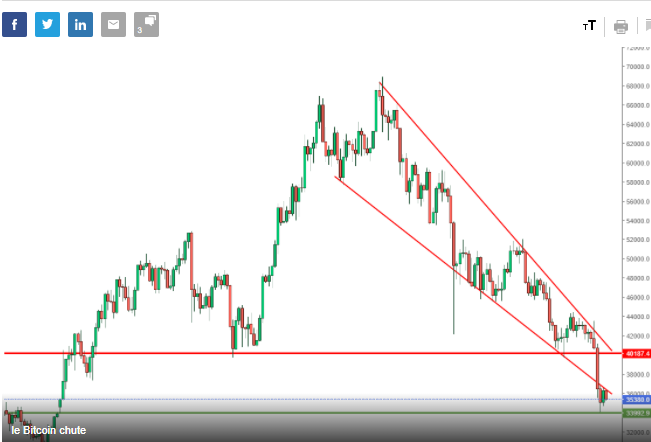 Investing.com - Bitcoin had a rough weekend, falling close to $34,000 on Saturday, and Sunday's small gains look more like a consolidation than a real rebound, so further losses cannot be ruled out for this week.

It should be remembered that the weakness in Bitcoin last week, which became more pronounced from Thursday onwards following a peak at $43,500, was mainly attributable to a wave of risk aversion in the global markets, as the stock markets were clearly in the red last week.

Fed meeting to be key event for Bitcoin this week

This wave of risk aversion is linked to a rise in bond yields, which in turn is due to expectations of a tightening of the Fed's monetary policy in the face of dangerously accelerating inflation. In this regard, it is worth noting that the FOMC will meet this week, which will undoubtedly be the most important event for Bitcoin and the global markets this week.

A Fed strengthening its hawkish stance, and confirming the possibility of a rate hike from March onwards (or worse, proceeding with a surprise rate hike) could weigh on Bitcoin, while a dovish surprise could support the cryptocurrency.

Risk aversion was also heightened by the prospect of a possible Russian attack on Ukraine, after the US State Department withdrew family members from its embassy in Kiev.

The New York Times also reported that President Joe Biden was considering sending thousands of US troops to NATO allies in Europe, as well as warships and aircraft.

Finally, from a chart point of view, we recall that the next support below the $34-35,000 area is on the major psychological threshold of $30,000. On the upside, only a return above $40,000 would begin to relieve the bearish pressure on the daily chart.