BOSTON/LONDON (Reuters) -Larry Fink, chief executive of the world's biggest asset manager BlackRock Inc (NYSE: BLK ), has defended its focus on the interests of society as well as on profits in the face of criticism from many sides.

Asset managers increasingly analyse corporate performance on environmental, social and governance-related issues to bolster returns and to attract cash from investors focused matters such as workforce diversity or how to cut carbon emissions.

In his annual open letter, Fink built on themes he has raised in previous January missives to other CEOs. He called on them to find a purpose and to practice 'stakeholder capitalism,' whereby companies seek to serve the interests of all connected to them.

"Stakeholder capitalism is not about politics," Fink said in the letter issued late on Monday, entitled The Power of Capitalism.

He said it was not 'woke' and did not have an ideological agenda, but was capitalist in that it was based on mutually beneficial relationships with employees, customers, suppliers and communities.

Fink, 69, also spoke up for BlackRock's stance in engaging with companies on the transition to a low-carbon economy rather than divesting from fossil fuel sectors, saying the companies cannot be the "climate police."

"Divesting from entire sectors – or simply passing carbon-intensive assets from public markets to private markets – will not get the world to net zero," he said.

In an interview with CNBC on Tuesday Fink added that he is frustrated about the process of the energy transition. He said it will require "a combination of government and private sector and that's just not happening."

While Fink had used previous letters to announce actions like a tougher threshold for some funds to invest in coal, the dirtiest fossil fuel, climate campaigners called the latest letter a missed opportunity.

"There’s not much to see here other than more hot air from a would-be climate leader," said Ben Cushing, Fossil-Free Finance Campaign Manager with the Sierra Club.

Jennifer J. Schulp, a director at the libertarian Cato Institute, said Fink's emphasis on profits showed his focus on the shareholder aspects of stakeholder capitalism, which she called "an ill-defined and vaguely-defined term."

"I took this as him trying to stake out a middle ground and find a balance," Schulp said in an interview.

Overseeing $10 trillion as of Dec. 31, BlackRock is one of the most influential voices in U.S. and European boardrooms, making Fink's annual letter a must-read.

In Monday's letter, Fink unveiled plans to launch a Center for Stakeholder Capitalism to create a "forum for research, dialogue, and debate."

Fink also said that BlackRock is working to expand an initiative for investors to use technology to cast proxy votes.

Under pressure from investors BlackRock cast a more critical set of proxy votes in 2021 such as backing calls for emissions reports or the disclosure of workforce diversity data.

At the same time the fund manager has faced challenges from conservative U.S. politicians. On Monday, West Virginia State Treasurer Riley Moore said his agency would no longer use a BlackRock liquidity fund, where it kept $21.8 million as of Jan. 6. 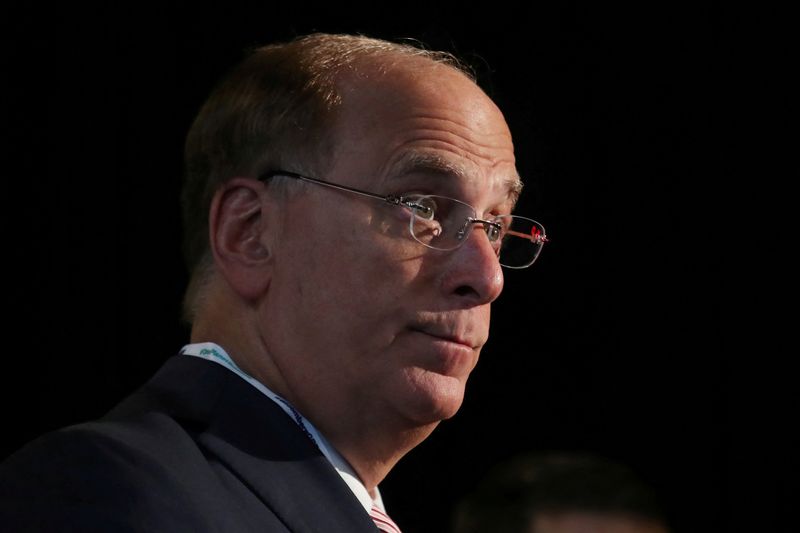 In a news release, Moore cited BlackRock's dealings in China and noted "that BlackRock has urged companies to embrace 'net zero' investment strategies that would harm the coal, oil and natural gas industries."