“Instead of slowing down, we see Covid as a reason to accelerate the transition to low-carbon energy,” Chief Executive Officer Claudio Descalzi said in an interview with Bloomberg Monday.

In February, Eni set tougher climate goals, in which the Italian energy giant pledged to slash net emissions by 80% by 2050. Less than two weeks later, Italy became the first European country to impose a lockdown to curb the spread of the coronavirus. Country after country followed, sending oil demand and prices tumbling to record-lows.

While consumption of gasoline and diesel in the country is now recovering, Eni’s biorefineries haven’t been affected by the pandemic. Its two plants -- Venice and Gela -- were the only ones in its refining system that did not reduce production during Italy’s lockdown as they “worked very well,” Descalzi said.

Along with its European peers, Eni slashed spending plans and cut a 400 million-euro ($455 million) share buyback, but has so far left its dividend intact. Investors and analysts have questioned how European oil majors will pay for the energy transition they’re promising, as renewables typically have lower returns than oil and gas projects.

Descalzi remains optimistic. Biorefineries have an internal rate of return of 15%, which is “not bad” compared with upstream, he said. Originally, the company had planned to fund its new renewables projects with free cash flow from oil above $50 to $60 a barrel. Following the pandemic’s impact on prices, the company is now looking for new ways to finance projects. While securing capital for green projects will be different, “access to funds will be easier.”

The CEO expects Eni will exceed its initial climate ambition, saying the company will now “match Europe’s goal of reaching net-zero emissions by 2050, across Scope 1, 2, and 3.” This would cover emissions from its own operations as well from the use of its products by customers.

Beyond converting refineries into biorefineries, the company will look to divestments as part of its emissions-reduction plan. Eni expects to sell marginal activities in some countries including “maybe the U.S.” 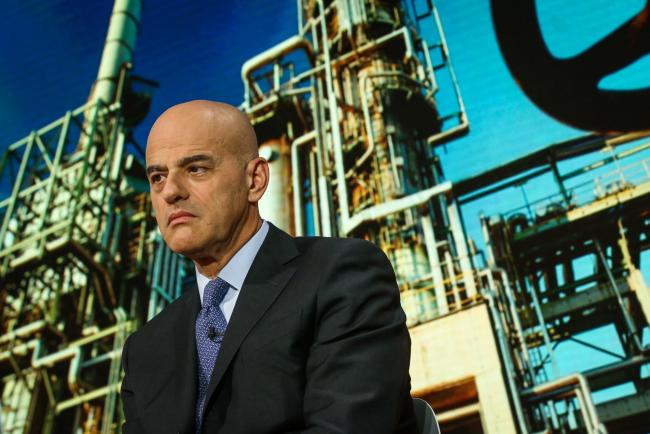