The tariff concept will be presented at a G7 finance leaders meeting this week as an economically less costly way to siphon away oil revenues from Moscow while producing faster results, U.S. Treasury officials told reporters.

The tariff plan would aim to keep more Russian oil in the global market, limiting price spikes spurred by a full embargo, while limiting the amount of money Russia can earn from exports, the officials said.

The European Commission, the EU's executive body, has proposed an embargo on imports of Russian crude that would start to phase in next year in response to Moscow's war in Ukraine, but some eastern European countries heavily dependent on Russian oil object to the plan.

Yellen said she discussed a wide range of options for reducing European dependence on Russian energy with European Commission President Ursula von der Leyen on Tuesday in Brussels and added that tariffs and embargoes "are two things that could be combined."

"We're not trying to tell them what's in their best interest, but you know, we discussed some of the things that are under consideration."

Yellen added that she was supportive of any plan the 27-member EU could agree on, but "it is critically important that they reduce their dependence on Russian oil."

She also pledged U.S. help to meet the bloc's energy needs, including working to increase global supplies of oil and gas.

The Treasury officials said because Russian oil sells at a discount to global benchmark crudes, a tariff could be set at a level that would both capture part of that gap and reduce Russia's profits, the officials said.

But it would have to be low enough that Russia earns more than its production costs, giving it an incentive to continue exporting, they added.

By keeping Russian oil on the market, the officials said, it would avoid potential further spikes in the price of oil from a European embargo, which could offset the embargo's impact on Russian revenues.

The officials said there was a strong desire among many governments to stop buying Russian oil as quickly as possible, but that this carries a high risk that outright embargoes could increase the price of oil considerably.

The Treasury was looking at pricing mechanisms including tariffs to help protect the global economy from further damage from high energy prices, they said.

Tariff monies could be put into a recovery and reconstruction fund for Ukraine, satisfying a desire to make Moscow pay at least part of a massive rebuilding effort. 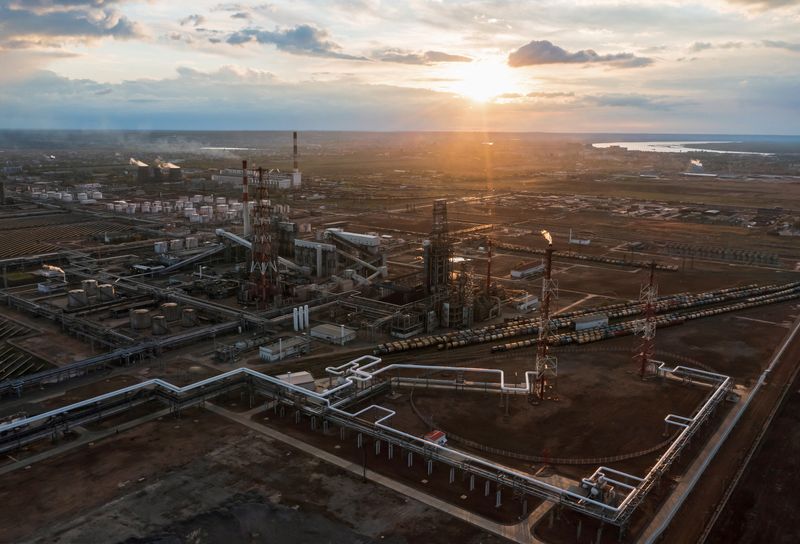 The suggestion comes after G7 leader Mario Draghi last week brought up the idea of forming a cartel of oil buyers to help limit prices during a meeting with U.S. President Joe Biden.

Yellen said that the United States was committed to helping to meet Europe's energy needs, including working with partners to increase exports of liquefied natural gas (LNG) to Europe.