By Anisha Sircar and Ambar Warrick

(Reuters) - Strength in commodity-linked sectors helped European stocks inch up to a record high close on Monday, although broader gains were stifled by some weak earnings and a lack of any major market cues.

Oil and base metal prices rose on the prospect of increasing demand after the United States passed a massive infrastructure bill. [MET/L] [O/R]

A survey also showed investor morale in the euro zone rose in November for the first time since July, as investors expected supply bottlenecks and higher prices to hold back the economy only temporarily.

The STOXX 600 hit new highs every day last week on a series of strong earnings and on growing optimism over a global economic recovery.

"After the busy session last week, the clock has gone back to zero as we're looking at months and months before monetary policy is changed, if at all," said David Madden, markets analyst at Equiti Capital.

"It's the best of both worlds: U.S., UK, and euro zone economies are recovering at a decent rate, and we're not expecting any major change from the ECB, Bank of England, or Fed for some time."

Major regional indexes including France's CAC 40, Germany's DAX and UK's FTSE were flat as the ECB's chief economist Philip Lane said inflation would ease next year and remain weak in the near term.

Consumer goods group Henkel dropped 6.5% and was the worst performer on the STOXX 600 after trimming its full-year forecast and saying it could not fully compensate for a spike in input prices. 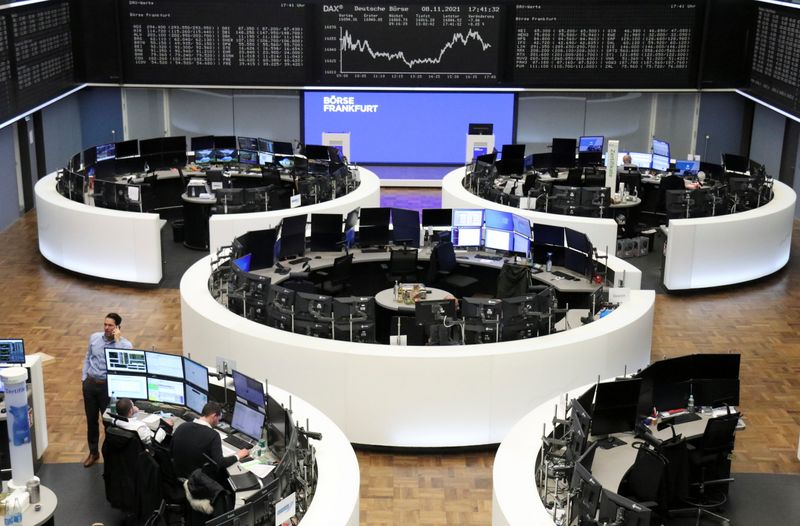