CARACAS (Reuters) - Venezuela's government - subject to sanctions by the United States and others - is increasingly paying providers in U.S. dollars as it seeks to reduce spending in its bolivar currency to control inflation, three sources with knowledge of the matter told Reuters.

State oil company PDVSA, government entities and publicly-owned companies this year have started paying a portion of invoices using dollars deposited in foreign currency accounts at some local banks, according to the sources, who asked not to be identified because of the sensitivity of the information.

Though Venezuela's government has paid some contractors in cash with euros before, it has not previously made dollar transfers on the scale it is now. The payments are an effort to stabilize the exchange rate and prices, the sources said.

Banks are allowed by the government to offer accounts in dollars but Washington's sanctions prevent international transfers into and out of Venezuela. Some local banks have maintained intermediary relationships with global partners.

Venezuela has grappled with hyperinflation for four years as the central bank printed money to finance the budget deficit.

The growing transactions show that, despite the hostility between Washington and President Nicolas Maduro's government, the United States has little recourse to stop Venezuela from using dollars to stabilize its economy.

The sources said the payments involve four Venezuelan banks, though they declined to name them or the providers receiving payment.

"Several service-providers receive payments in dollars in their local bank accounts and those funds are then used to pay other providers and even to pay part of their workers' salaries," one of the sources said.

The sources could not estimate the total quantity of dollar payments made by the government, but said some payments totaled $5,000 or more.

Economist Tamara Herrera, director of the consultancy Sintesis Financiera, said those receiving the payments, and the local banks, would not be exposed to U.S. legal repercussions because they are generally small local firms.

Some of the dollars used in payments come from foreign sales of crude oil , all three sources said, though none had details of how much income comes into Venezuela from oil sales.

Venezuela's government has increasing amounts of dollars at its disposal because of rising crude production. Crude exports in November were 572,567 barrels per day, according to documents seen by Reuters.

However, the central bank has not published figures about the trade balance since May 2019.

The government plans to hail its success in lowering inflation at the end of the year, two of the sources said.

Consumer prices have been falling since May and in October reached a monthly figure of 6.8%, the lowest since mid-2015, according to central bank figures.Despite the recent slowing, the annualized figure in October was 1,575%. 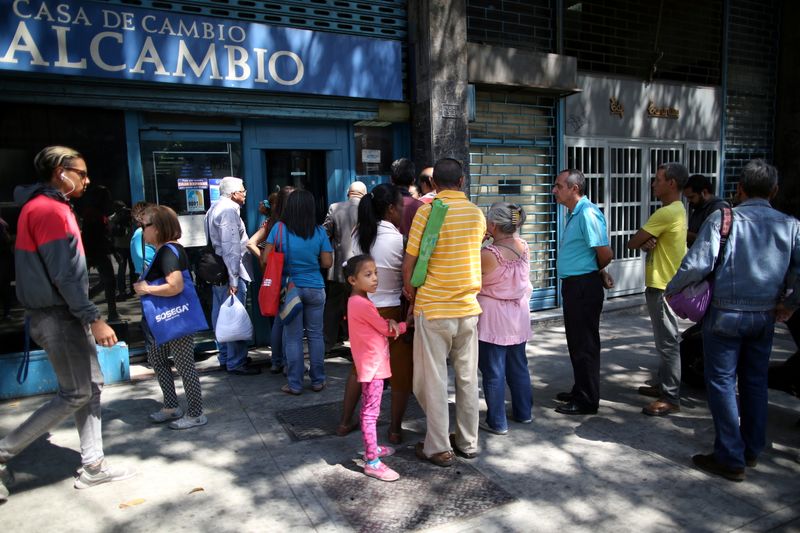 The government loosened currency controls in 2019 amid a long economic collapse and U.S. sanctions, allowing some industries a partial recovery.

Many supermarkets and pharmacies now take payments in foreign currency more frequently than bolivars. Maduro has recognized publicly that the dollar functions as an "escape valve" for economic recovery.