(Reuters) -General Motors Co has expanded the recall of its Chevrolet Bolt electric vehicles due to a risk of fire from the pouch-type lithium-ion battery cells made by South Korea's LG.

HOW DOES A LITHIUM-ION BATTERY WORK?

Cells come in different shapes and sizes, but most have three key elements: Electrodes, electrolyte and separator.

Electrodes store the lithium. The electrolyte carries the lithium ions between electrodes. The separator keeps the positive electrode from coming in contact with the negative electrode.

WHY DO LI-ION BATTERIES POSE A FIRE RISK?

Lithium-ion batteries, whether they are used in cars or electronic devices, can catch fire if they have been improperly manufactured or damaged, or if the software that operates the battery is not designed correctly.

The major weakness of lithium-ion batteries in electric cars is the use of organic liquid electrolytes, which are volatile and flammable when operating at high temperatures. An external force such as a crash can also lead to chemical leakage.

"For EV fires, it's been always very difficult to pinpoint the exact root cause of the fire, because it is extremely difficult to 're-enact' the fire incident with the same conditions," said Kim Pil-soo, automotive engineering professor at Daelim University.

Also authorities, car makers and battery makers often do not disclose what the exact safety risk is.

WHAT CAUSED THE FIRES ON BOLTS AND KONAS?

In February, South Korea's transport ministry said some defects had been found in some battery cells manufactured at the LGES China factory and used in Hyundai Motor's electric cars, including the Kona EV. Hyundai's recall cost about 1 trillion won ($854 million).

GM said the batteries supplied by LG for the Bolt EV and Bolt EUV may have two manufacturing defects – a torn anode tab and folded separator – present in the same battery cell, which increases the risk of fire.

For a factbox on major battery fires:

All three types of lithium-ion batteries currently used in electric cars - cylindrical, prismatic and pouch-type - are fundamentally the same in functionality, but each has pros and cons.

Cylindrical and prismatic batteries are cased in hard materials. Pouch-types use sealed flexible foils and are protected by thin metal bags.

The technology used in cylindrical batteries is old and yields consistent results. These cells can withstand high internal pressure without deforming. They are also cheaper, making them ideal for mass production. But they are heavier and their shape stops cells from being packed as densely as with other battery forms. Tesla (NASDAQ: TSLA ) Inc mostly uses cylindrical batteries, some supplied by LGES.

Compared with cylindrical and prismatic cells, pouch-type battery cells allow for lighter and thinner cell fabrication, and design flexibility for different capacities and space requirements for different vehicle models. However, they are vulnerable to swelling, and are more vulnerable in crashes, posing a greater fire risk.

GM and Hyundai Motor use pouch battery cells from LG Energy Solution (formerly LG Chem). Volkswagen (DE: VOWG_p ) said earlier this year it would shift away from pouch-style cells made by LG and SK Innovation Co Ltd to prismatic technology.

ARE THERE OTHER SOLUTIONS?

Companies such as China's BYD Co produce EV battery cells that use lithium iron phosphate cathodes, which are less prone to catching fire, but are not able to store as much energy as standard cells that use nickel cobalt manganese cathodes.

Others including GM are testing different chemistries such as nickel-cobalt-manganese-aluminum (NCMA) technology, which use less cobalt, making the cells more stable and cheaper. 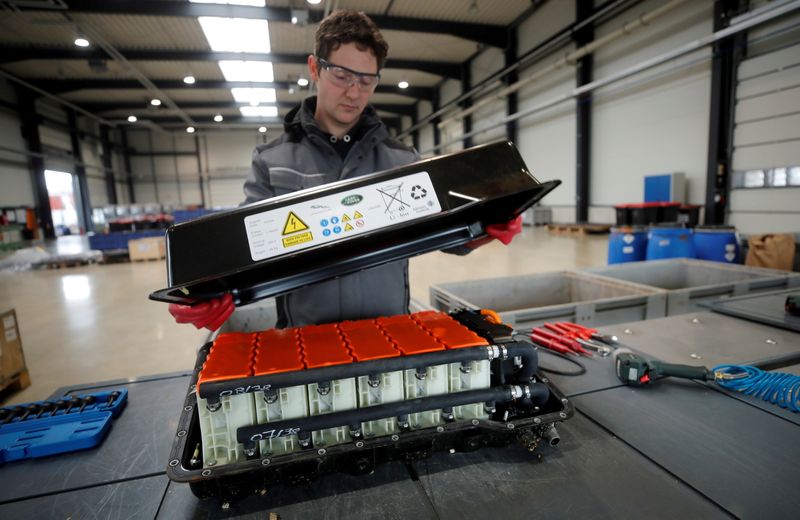 A number of companies including Toyota Motor Corp (T: 7203 ) are also developing battery cells with solid-state electrolytes, which could minimize overheating issues and fire risks, but could take another three to five years to commercialize.