Australia is facing its worst Covid-19 crisis yet with experts saying a lockdown of Sydney needs to be ramped up to prevent further deterioration of the successful record in stamping out the virus.

Facebook Inc (NASDAQ: FB ). is delaying its return to office plans due to a resurgence in Covid-19 cases, telling U.S. employees that they don’t need to come back until January 2022. AT&T (NYSE: T ) said it will require all employees in areas with “high or substantial” spread to wear masks indoors.

Malaysia lowered its 2021 economic growth forecast for a second time, as renewed movement restrictions and rising infections hamper the recovery.

Gross domestic product is expected to expand 3%-4% this year, Bank Negara Malaysia Governor Nor Shamsiah Yunus said. That compares to an earlier estimate of 6%-7.5% growth. The economy shrank 2% in the second quarter compared to the previous three months on a seasonally adjusted basis compared with the median estimate of a 1.9% contraction in a Bloomberg survey.

The U.S. Food and Drug Administration amended the emergency use authorizations for both the Pfizer-BioNTech and the Moderna COVID-19 vaccines to allow an additional dose for some immunocompromised individuals.

The FDA assessed information on the third dose of Pfizer or Moderna vaccinesm, it said in a statement, adding that other fully vaccinated individuals do not need an additional vaccine dose right now.

China reported a slowdown in new local cases in the most recent outbreak, with only 52 confirmed infections, including asymptomatic ones. So far more than 1,000 cases across more than half of the 31 provinces have been found, posing a challenge to the country that has tackled multiple flareups with some of the most rigorous testing and quarantine measures in the world. Yangzhou in the eastern Jiangsu province, the hardest hit city in the delta outbreak, initiated the seventh round of citywide mass testing on Thursday. The capital Beijing has shut some entertainment venues.

Prime Minister Kim Boo-kyum urged the public to refrain from traveling during the three-day holiday starting on Saturday, as the number of daily new cases hovers near 2,000 for a third day. Kim also said he strongly recommends those who have traveled to get tested.

More than a year and a half into the pandemic, Australia is facing its worst Covid-19 crisis yet with experts saying a lockdown of its biggest city needs to be ramped up to prevent further deterioration of the successful record in stamping out the virus.

Though Sydney has been in lockdown for nearly two months now, the curbs are generally looser than those that helped Melbourne beat back the pathogen last year; daily infections have surged from 12 on June 26, when the stay-at-home order was first announced, to records of around 350 this week.

A divided U.S. Supreme Court eased New York’s temporary ban on evictions of renters who are experiencing financial hardships because of the pandemic.

Over the dissents of three liberal justices, the court on Thursday sided with small landlords who say they have been devastated by what they contend is an unconstitutional law. The justices blocked a provision that protected tenants from eviction if they filed a declaration that they are facing Covid-related financial or health hardship. The order doesn’t affect a separate provision that lets tenants cite hardship as a defense to eviction proceedings. The ban had been set to last through Aug. 31.

At least 11% of patients hospitalized with Covid-19 in the U.K. during the first wave of the pandemic last year became infected after admission, according to a study of 314 hospitals in Britain.

Residential care homes and mental health facilities had a greater proportion of patients contract the virus after admission than general-care hospitals, according to the study, conducted by researchers at a group of U.K. universities and published Thursday in the medical journal The Lancet.

Several reasons were cited, including hospitals having limited facilities to isolate cases, limited access to rapid and reliable testing and PPE, as well as lack of understanding of the virus in the early stages of the outbreak.

Shopify Inc .’s employees will have to show they are fully vaccinated against Covid-19 in order to meet each other in person at work, Chief Executive Officer Tobi Lutke tweeted.

Mexico posted a record rise in cases Thursday for the second day in a row as the pandemic surges anew in the country.

U.S. Supreme Court Justice Amy Coney Barrett refused to block Indiana University’s requirement that all students be vaccinated against Covid-19 for the fall semester unless they have a religious or medical exemption.

Barrett gave no explanation as she turned away an emergency request from eight students who said the vaccine mandate violated their constitutional rights.

The case marked the first time the nation’s highest court has acted on a vaccine mandate.

Governor Ralph Northam (JO: NHMJ ) mandated masks indoors in all Virginia schools for students, teachers and staff. “I look forward to a safe start to the school year,” the Democratic governor said in a press release. His mandate came at time when several local districts moved to not require masks, in spite of a state law that required in-person learning in line with CDC guidance. Students must mask unless they are eating, drinking, sleeping or exercising.

Dallas-based AT&T said it will require all employees in areas with “high or substantial” Covid-19 spread to wear masks indoors as of Friday. In response to the viral surge fueled by the delta variant, the company is also requiring all managers to get vaccinated and is in discussions with unions on how to get other workers on board with vaccinations.

The company says it is following CDC guidelines to “provide for effective business continuity in what is a dynamic and uncertain environment,” according to a statement Thursday. AT&T has 227,000 employees and about 100,000 union workers.

Business and politics are colliding in Texas, where Republican Governor Greg Abbott is facing backlash over a conservative social agenda that companies say will make it harder for them to attract and retain the best talent.

Facebook Inc. is delaying its return to office plans due to a resurgence in Covid-19 cases, telling U.S. employees Thursday that they don’t need to return to work in person until January 2022.

“Given the recent health data showing rising Covid cases based on the delta variant, our teams in the US will not be required to go back to the office until January 2022,” Tracy Clayton, a Facebook spokesperson, in a statement.

Facebook had originally said it expected about 50% office capacity in the U.S. by September, with a full return by October.

The World Health Organization called on governments to “provide all data and access” to help advance investigations into the origin of the virus that causes Covid-19.

The United Nations agency said in a statement it’s creating a scientific adviser group to support recommended further studies outlined in March after a joint report by WHO and China. Afterward, WHO said it couldn’t rule out any hypothesis, including a lab leak.

Secure labs in the two countries that keep stocks of the eradicated smallpox virus, Russia and the U.S., submit every two years to inspections by the WHO, which publishes the inspection reports, according to the statement.

U.S. hospitals are desperately hunting for medical staff as the Covid-19 wave that’s pushing some systems to their breaking point in the South spills into the rest of the country.

More than a dozen states face severe shortages of personnel, U.S. Department of Health and Human Services data show. In Texas and Hawaii, hospitals are building tents for extra space. In Florida, the federal government has deployed hundreds of ventilators to Florida in a rare tapping of the Strategic National Stockpile for that equipment.

Booster shots that are expected to be approved for people with compromised immune systems aren’t appropriate for other people at this time, the head of the U.S. Centers for Disease Control and Prevention said.

As soon as Thursday, the Food and Drug Administration is expected to recommend a third Covid-19 vaccine dose for immunocompromised people. But no one else should seek to get another shot on their own, CDC Director Rochelle Walensky said at a briefing.

“At this time, only certain immune-compromised individuals may need an additional dose,” Walensky said.

San Francisco will require proof of full vaccination for indoor patrons of restaurants, bars and gyms, becoming the first major U.S. city to impose such a stringent mandate.

The rule also will apply to major indoor spaces such as theaters and entertainment venues, Mayor London Breed’s office said in a statement Thursday.

The move comes as the San Francisco area, which suffered one of the country’s first coronavirus outbreaks last year, is seeing case counts rise again due to the fast-spreading delta variant. New York City imposed a similar order last week, but only required that indoor diners and gym patrons have one vaccine dose.

The nationwide positive-test rate in the U.S. declined during the week that ended Monday, breaking an upward trend fueled by the delta variant, according to Centers for Disease Control and Prevention data released Thursday.

The rolling seven-day average of viral lab test positivity fell 0.3% in the report, which didn’t explain the decline. The so-called positivity rate fell nationwide to 9.5%, compared with 10.2% in a similar CDC report issued Wednesday. 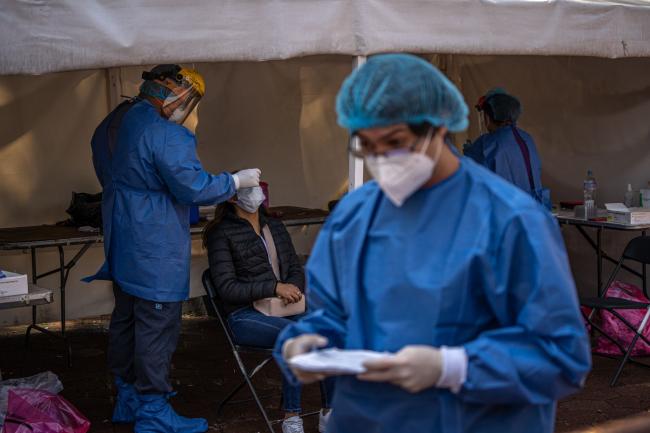