NEW YORK (Reuters) - The Dow Industrials and S&P 500 closed at record highs on Monday, as earnings season kicked in to high gear in one of the heaviest reporting weeks of the quarter with bellwethers in multiple sectors poised to announce results.

While the Dow and S&P hit new highs, the Nasdaq outperformed on the day, buoyed by gains in Tesla (NASDAQ: TSLA ) and PayPal (NASDAQ: PYPL ), and the tech-heavy index stands less than 1% away from its Sept. 7 closing record.

"Tesla, there is a lot of the chatter out there today and Hertz placing a big order has created some excitement," said Tim Ghriskey, chief investment strategist at Inverness Counsel in New York.

Tesla, which has risen in nine of the past ten sessions and is up more than 28% for the month, provided the biggest boost to the S&P 500 and the Nasdaq. Also helping to lift the two indexes was PayPal Inc, which gained 2.70% after the payments company scrapped plans to buy the digital pinboard site Pinterest Inc for as much as $45 billion. Shares of Pinterest slumped 12.71%.

U.S. President Joe Biden on Monday held out hope for an agreement on his major spending plans before attending a climate summit in Scotland, while the White House said Democratic negotiators were closing in on a deal.

The majority of the 11 major S&P sectors advanced, with energy and consumer discretionary shares the best performing, as energy names received a boost from another rise in oil prices to multiyear highs on tight supply.

Shares of Facebook Inc (NASDAQ: FB ) were up 1.26% ahead of its quarterly results. Investor fears that like Snap Inc (NYSE: SNAP ), the social media giant's ad revenue could face the brunt of Apple Inc (NASDAQ: AAPL )'s privacy changes appeared warranted as the social media company warned the rules would weigh on its digital business in the fourth quarter when it reported results after the closing bell. Its shares rose 2.95% in extended trade in choppy trading.

This week, 165 components of the S&P 500 are expected to post quarterly results, according to Refinitiv data. Analysts expect earnings at S&P 500 companies to grow 34.8% year-on-year for the third quarter.

Investors are also assessing how companies are navigating supply-chain bottlenecks, labor shortages and inflationary pressures to sustain growth. Of the 119 companies in the S&P 500 that have reported earnings through Monday morning, 83.2% have topped analysts' expectations.

Shares of Kimberley-Clark declined 2.20% after the Huggies diaper maker cut its 2021 profit outlook due to higher input cost inflation.

Advancing issues outnumbered declining ones on the NYSE by a 1.91-to-1 ratio; on Nasdaq, a 1.76-to-1 ratio favored advancers. 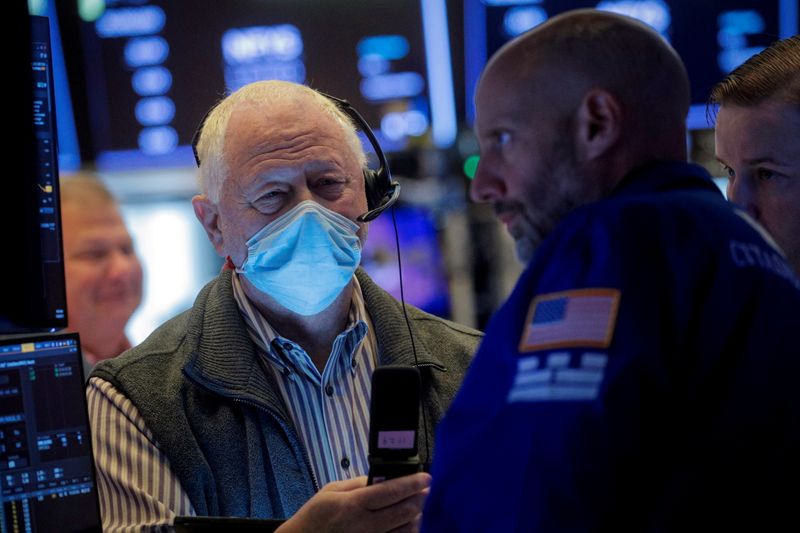 Volume on U.S. exchanges was 10.89 billion shares, compared with the 10.41 billion average for the full session over the last 20 trading days.