(Reuters) - The S&P 500 and Nasdaq closed down on Wednesday after a choppy session on Wall Street, as investors struggled to grasp a clear direction as they weighed how the Federal Reserve's monetary policy tightening might feed through into corporate America.

For the benchmark S&P 500, it was the fifth straight session that it has declined, while the Nasdaq finished down for the fourth time in a row. The Dow snapped a two-session losing streak, as it ended unchanged from the previous day.

The Nasdaq was dragged down by a 1.4% drop in Apple Inc (NASDAQ: AAPL ) on Morgan Stanley (NYSE: MS )'s iPhone shipment target cut and a 3.2% fall in Tesla (NASDAQ: TSLA ) Inc over production loss worries.

Markets have also been rattled by downbeat comments from top executives at Goldman Sachs Group Inc (NYSE: GS ), JPMorgan Chase & Co (NYSE: JPM ) and Bank of America Corp (NYSE: BAC ) on Tuesday that a mild to more pronounced recession was likely ahead.

Fears that the U.S. central bank might stick to a longer rate-hike cycle have intensified recently in the wake of strong jobs and service-sector reports.

More economic data, including weekly jobless claims, producer price index and the University of Michigan's consumer sentiment survey this week, will be on the watch list for clues on what to expect from the Fed on Dec. 14.

"It feels like we're in this very uncertain period where investors are trying to ascertain what's more important, as policymakers are slowing down on rates but the data is not playing ball," said Craig Erlam, senior market analyst at OANDA.

"The market is trying to balance the headwinds and the tailwinds and this is causing some confusion."

Concerns about a steep rise in borrowing costs have boosted the dollar, but dented demand for risk assets such as equities this year. The S&P 500 is on track to snap a three-year winning streak.

Three of the 11 major S&P sector indexes were higher, with healthcare one of them. Technology and communication services, down 0.5 and 0.9% respectively, were the worst performers.

Energy fell for its fifth straight session. The sector's performance was weighed by U.S. crude prices falling again, settling at the lowest level in 2022, as concerns over the outlook for global growth wiped out all of the gains since Russia's invasion of Ukraine exacerbated the worst global energy supply crisis in decades.

Carvana Co had its worst day as a public company, losing nearly half its stock value, after Wedbush downgraded the used-car retailer's stock to "underperform" from "neutral" and slashed its price target to $1. 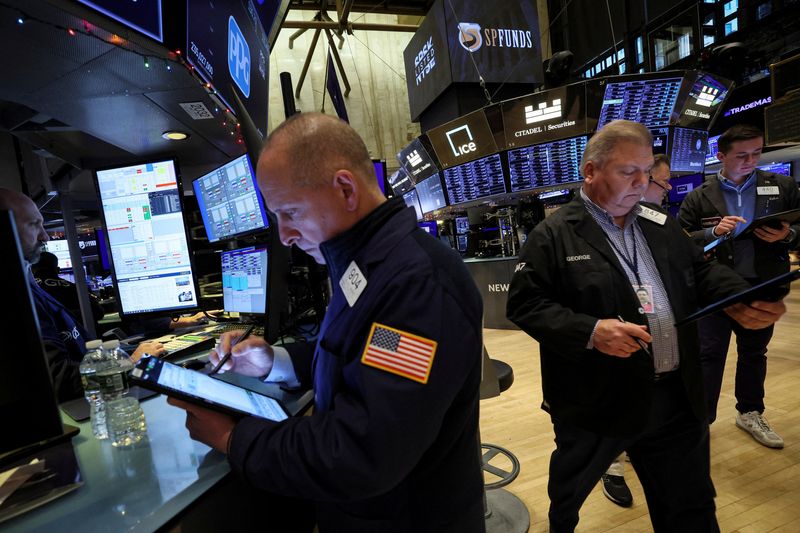 Volume on U.S. exchanges was 10.29 billion shares, compared with the 10.98 billion average for the full session over the last 20 trading days.