NEW YORK (Reuters) - Wall Street fell in a broad sell-off on Monday, with the S&P 500 and Nasdaq suffering their biggest daily percentage drops since May, as fear of contagion from potential collapse of China's Evergrande drove investors out of equities in a flight for safety.

The Nasdaq also hit its lowest level in about a month, but indexes pared losses just before the close to end well off their lows of the session. The Nasdaq was down more than 3% during the day.

All 11 major S&P 500 sectors were lower, with economically sensitive groups like energy, which fell 3%, down the most. Defensive sectors including utilities were down the least.

Investors also were nervous ahead of the Federal Reserve's policy meeting this week.

The banking sub-index dropped 2.9% while U.S. Treasury prices rose as worries about the possible default of Evergrande appeared to affect the broader market.

"You kind of knew that when there was something that caught markets off guard, that it was going to lead to probably a bigger sell-off and you didn't know what the reason would be," said Sameer Samana, senior global market strategist at Wells Fargo (NYSE: WFC ) Investment Institute.

"I guess it's the China news but... it's not altogether surprising given how bullish people were."

Wednesday will bring the results of the Fed's policy meeting, where the central bank is expected to lay the groundwork for a tapering, although the consensus is for an actual announcement to be delayed until the November or December meetings.

Strategists at Morgan Stanley (NYSE: MS ) said they expected a 10% correction in the S&P 500 as the Fed starts to unwind its monetary support, adding that signs of stalling economic growth could deepen it to 20%.

Most airline carriers ended higher after the United States announced it will relax travel restrictions in November on passengers from China, India, Britain and many other European countries who have received COVID-19 vaccines.

Declining issues outnumbered advancing ones on the NYSE by a 5.40-to-1 ratio; on Nasdaq, a 4.66-to-1 ratio favored decliners. 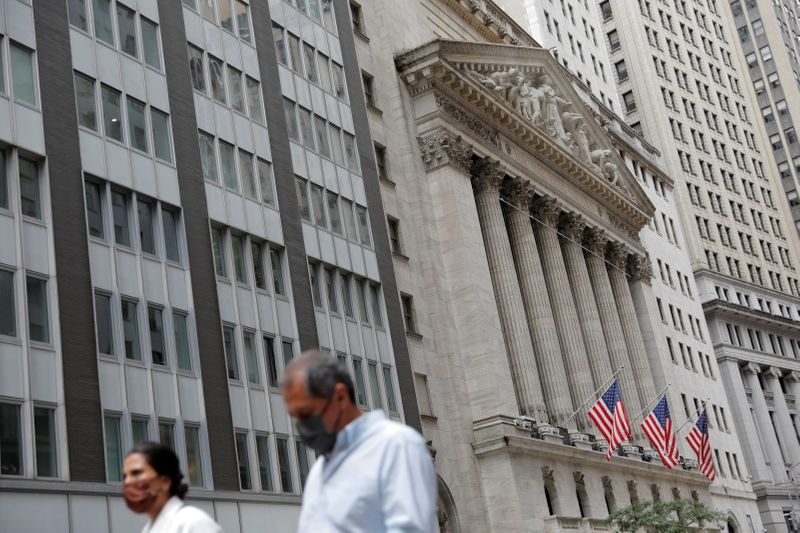 Volume on U.S. exchanges was 12.24 billion shares, compared with the 9.89 billion average for the full session over the last 20 trading days.