(Reuters) - The S&P 500 boasted a record closing high and its seventh straight session of gains on Thursday while the Nasdaq was boosted by such high-profile stocks as Tesla (NASDAQ: TSLA ) Inc and Microsoft Corp (NASDAQ: MSFT ) but a tumble in IBM (NYSE: IBM ) shares weighed on the Dow.

After hitting an intraday record the previous day the Dow was in the red for most of Thursday's session as IBM fell 9.6% after missing Wall Street estimates for quarterly revenue as orders in one business segment declined ahead of a spinoff next month.

Among the S&P's 11 major sectors, the biggest boost for the benchmark came from consumer discretionary stocks and the technology index, while energy stocks were the biggest drag as crude oil futures fell on concerns about demand.

"For the most part you're dealing with a slightly risk-off day with people going back to more defensive sectors" including big technology companies, said Chris Zaccarelli, chief investment officer at Independent Advisor Alliance in Charlotte, North Carolina.

"You're seeing oil down a little bit today so potentially there's some global growth concerns. You're seeing some inflation concerns as well."

However, the CBOE Volatility index , also referred to as Wall Street's fear gauge, closed at its lowest level since February 2020. Shortly after that date, the volatility index had climbed as COVID-19 brought the global economy its knees.

The VIX's low level implies that investors do not see a big decline or upswing for stocks ahead despite widespread concerns about supply-chain problems hiking costs, according to Shawn Cruz, senior market strategist at TD Ameritrade.

"The market may be saying the supply-chain issues that are driving up costs are going to be transitory because markets are discounting mechanisms," pricing in what investors expect to happen in the future, Cruz said.

Analysts were expecting S&P 500 third-quarter earnings to rise 33.7% year-on-year, with about 100 company reports in so far, according to the latest data from Refinitiv.

Tesla was the Nasdaq's biggest boost, rising more than 3%, as investors digested the electric car maker's upbeat earnings, despite a supply-chain warning.

Declining issues outnumbered advancing ones on the NYSE by a 1.22-to-1 ratio; on Nasdaq, a 1.00-to-1 ratio favored advancers. 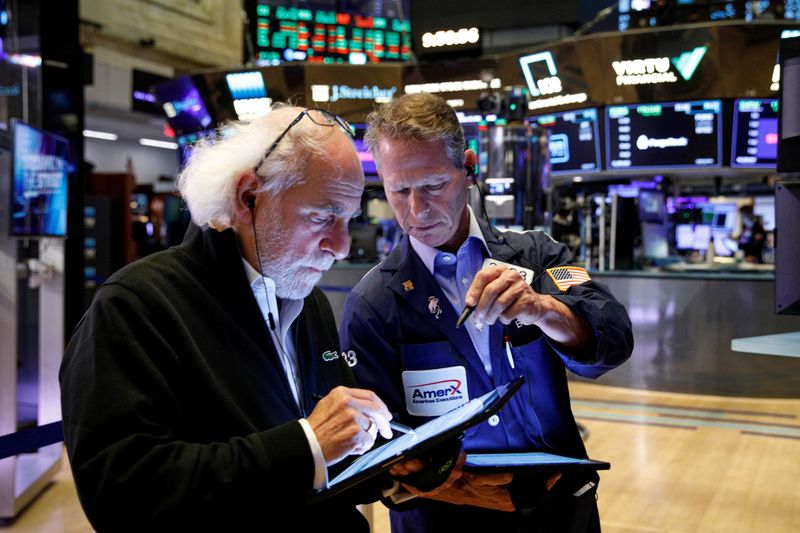