The Dow narrowly avoided ending more than 20% lower than its Jan. 4 record all-time closing peak of 36,799.64 points, meaning the blue-chip index did not attain a bear market label, according to a widely used definition.

The S&P 500 and the Nasdaq are already in a bear market.

However, all three indexes suffered heavy weekly declines. The Nasdaq dropped 5.03% - its second straight week falling by more than 5% - with the S&P down 4.77% and the Dow 4% lower.

After enjoying hefty gains for last two years, Wall Street has been rocked in 2022 by worries about a host of issues including the Ukraine conflict, the energy crisis in Europe, China's COVID-19 flare ups, and tightening financial conditions across the globe.

A half dozen central banks, including in the United States, Britain, Sweden, Switzerland and Norway, delivered rate hikes this week to fight inflation, but it was the Fed's signal that it expects high U.S. rates to last through 2023 that caught markets off guard.

"There had been some optimists out there saying that inflation may be coming under control but the Fed effectively told them to sit down and shut up," said David Russell, VP of market intelligence at TradeStation Group.

"The Fed is trying to rip the band-aid off, trying to kill inflation while the jobs market is still strong."

Dire outlooks from a handful of companies have also added to woes in a seasonally weak period for markets. Having withdrawn its earnings forecast last week, FedEx Corp (NYSE: FDX ) outlined on Thursday cost cuts of up to $2.7 billion after falling demand hammered first-quarter profits.

The S&P 500's estimated earnings growth for the third quarter is at 4.6% down from 5% last week, according to Refinitiv data.

"We're having everyone reassess exactly how far the Fed will go, and that's troubling for the economy," said Ed Moya, senior market analyst at OANDA.

"It's becoming the base case scenario that this economy is going to have a hard landing, and that is a terrible environment for U.S. stocks."

All the 11 major S&P sectors declined, led by a 6.8% slide in energy shares. Oil and gas-related stocks were pummeled by the decline in crude prices, which fell in response to concerns about demand in a recessionary environment and the strong U.S. dollar. [O/R]

Shares of Costco Wholesale Corp (NASDAQ: COST ) dropped 4.3% after the big-box retailer reported a fall in its fourth-quarter profit margins. 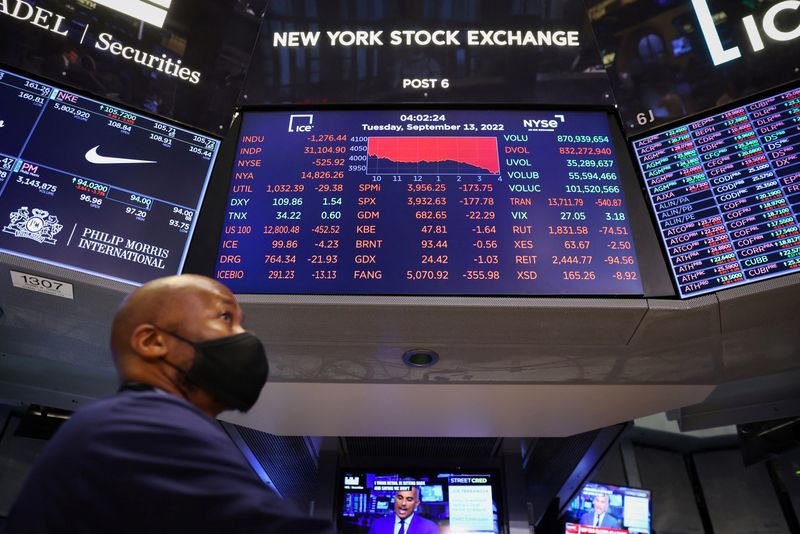 Volume on U.S. exchanges was 13.29 billion shares, compared with the 11.11 billion average for the full session over the last 20 trading days.