(Reuters) - Wall Street fell sharply on Friday following a solid jobs report for September that increased the likelihood the Federal Reserve will barrel ahead with an interest rate hiking campaign many investors fear will push the U.S. economy into a recession.

The Labor Department reported the unemployment rate fell to 3.5%, lower than expectations of 3.7%, in an economy that continues to show resilience despite the Fed's efforts to bring down high inflation by weakening growth.

Nonfarm payrolls rose by 263,000 jobs, more than the 250,000 figure economists polled by Reuters had forecast. Money markets raised to 92% the probability of a fourth straight 75 basis-point rate hike when Fed policymakers meet on Nov. 1-2, up from 83.4% before the data.

In the latest of a steady stream of hawkish messages by policymakers, New York Fed President John Williams said more rate hikes were needed to tackle inflation in a process that will likely increase the number of people without jobs.

The data cemented another jumbo-sized, 75 basis-point rate hike in November as "the labor market is still way too hot for the Fed's comfort zone," said Bill Sterling, global strategist at GW&K Investment Management.

"This was a classic case of good news is bad news," he said. "The market took the good news of the robust labor market report and turned it into an ever-more vigilant Fed and therefore potentially higher risks of a recession next year."

One economist said the Fed should not be reassured by the tight labor market because when the unemployment rate begins to rise, it does so quickly and is a leading indicator of a recession.

"We haven't felt the full effects of the tightening," said Joseph LaVorgna, chief U.S. economist at SMBC Nikko Securities. "They're going to keep going until eventually this thing turns over, and when it turns over you won't be able to slow the momentum."

Next week's consumer price index will provide a key snapshot of where inflation stands.

Despite Friday's nosedive, a hefty two-day rally earlier in the week pushed the S&P 500 , the Dow and the Nasdaq to post their first week of gains after three straight weeks of losses.

Volume on U.S. exchanges was 11.15 billion shares, compared with the 11.73 billion average for the full session over the past 20 trading days.

The Philadelphia SE Semiconductor index fell 6.06% after a revenue warning from Advanced Micro Devices (NASDAQ: AMD ) signaled a chip slump could be worse than expected. The index posted its biggest single-day percentage decline in more than three weeks.

AMD shares fell 13.9% as the company's third-quarter revenue estimates were about $1 billion lower than previously forecast. It was the largest declining stock on the Nasdaq 100 . 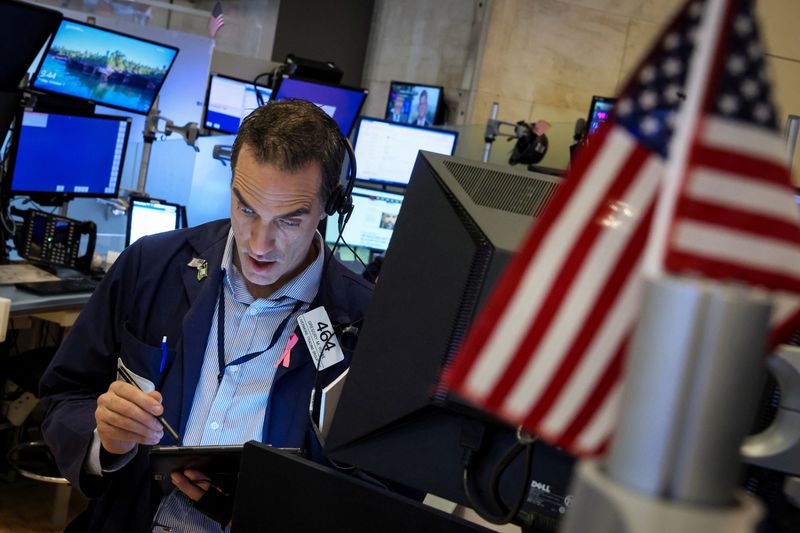 Declining issues outnumbered advancing ones on the NYSE by a 5.78-to-1 ratio; on Nasdaq, a 4.56-to-1 ratio favored decliners.