(Bloomberg) -- New York City’s public school shutdown and the prospect of a crippled mass transit agency brings a new sense of vulnerability to a city that had been making a comeback from its dark days as the world’s Covid-19 epicenter.

And more bad news is imminent. New York Governor Andrew Cuomo said the city’s rising test rate could force indoor dining, gyms and some other nonessential businesses to close, and Mayor Bill de Blasio said he expects those actions to be taken “quite soon.”

“The two most important things about getting back to work and getting back to normal are school and transportation,” said Jeff Blau, chief executive officer of Related Companies, the New York City-based real estate developer. “Today was a bit of a double whammy.”

The moves threaten the city’s economy just as it was showing signs of improvement. Before Covid-19 struck, the city’s unemployment rate was 3.4%. New York, the early center of the U.S. outbreak, saw the rate touch a high of 20.3% in June. By September, with the reopening of schools and many businesses, it had partly recovered to 14.1%.

For the parents of hundreds of thousands of students, the crisis was immediate: They must find alternative child-care arrangements or adjust their work schedules by Thursday, after the mayor said the city had reached a 3% positivity rate that triggered the halt of at least two weeks to in-class instruction.

Workers also face the prospect of longer commutes, after New York’s Metropolitan Transportation Authority said it will have to slash subways and buses by 40% and chop commuter rail service by half if aid doesn’t come from Washington.

“The Covid-19 health crisis happened fast, but the economic consequences are going to roll out over time and the news is going to get worse before it starts to turn around,” said Kathryn Wylde, president of the Partnership for New York City, a civic organization comprised of corporate chief executives.

New York City came to a near-standstill earlier this year as Cuomo shut schools and nonessential businesses to slow the spread of Covid-19. At its peak in April, the city was reporting more than 5,000 cases a day. By August, it had controlled the spread to fewer than 300 daily cases. A recent nationwide resurgence associated with the colder weather has brought that number back up, to a seven-day average of 1,212 as of Nov. 16.

“We are resolved to keep fighting,” de Blasio said Wednesday at a news briefing. “We will overcome this moment.”

De Blasio had warned parents last week that schools could close as soon as Nov. 16 if the city’s average positive-test rate reached 3% over the weekend. Though the rate stayed below that threshold for days, parents were on watch for updated numbers that would trigger school closings the next day.

New York City has the largest public-school system in the U.S., and its decision to offer at least some in-class instruction was watched around the nation as other districts hesitated to follow its lead. The closing forces almost 300,000 students who had been participating to join the rest of the city’s 1.1 million public-school students in all-online instruction at home.

The schools’ shutdown begins days after the deadline for parents’ one chance to switch their children from all-remote to the blended program. Educators say face-to-face learning is more effective than at-home instruction, especially for younger and special-needs students. Tens of thousands remain without mobile devices and adequate broadband service, a problem school officials say may not be fixed until later in the school year.

“It’s crazy,” said Kanika Ingram, a Verizon (NYSE: VZ ) field technician whose husband is a U.S. Postal Service manager. “We’re looking at Plans B through Z, because my husband and I both must work outside the home, and I have three weeks left of reduced paid leave.”

The challenge for workers will only get harder as the MTA may slash service without $12 billion of federal funds as the coronavirus pandemic has decimated revenue and ridership.

For those living in the New York City region, mass transit is a way of life. Shopkeepers, restaurants and businesses depend on it to stay afloat. The drastic scaleback will dampen the city’s ability to lure workers from their homes and get them back into empty office buildings and move people around the city for shopping, entertainment and dining. Before the pandemic, about 59% of all workers in Manhattan used public transportation, compared with 5% in the nation as a whole, according to the U.S. Census.

“Massive cuts to the MTA would have a devastating effect on New York City businesses, from offices to retail to hospitality, and undoubtedly result in more bankruptcies of both businesses and individuals,” said David Wander, a bankruptcy partner at Davidoff Hutcher & Citron LLP.

“With significantly reduced mass transit service, the value of having a business here is diminished, especially when you factor in the high costs of operating in the city.”The service cuts would also mean laying off 9,367 MTA employees and imposing fare and toll increases.

Those changes would reverberate across the region, resulting in a $65 billion loss in gross domestic product annually for the New York City region and costing a potential 450,000 jobs by 2022, according to an NYU Rudin Center for Transportation Policy and Management report.

The MTA may implement the service cuts and layoffs as early as May, with major changes to commuting times. Riders would pay higher fares while waiting 15 minutes on weekends for subways, see nearly a fourth of bus routes reduced and have peak-time commuter rail service cut to almost 30 minutes or even hourly. MTA’s board is set to vote on the 2021 budget, which includes the potential service and workforce changes, next month.

Investors have been assessing rising coronavirus cases across the U.S. with positive vaccine news over the past couple of weeks, weighing on shares of technology and other companies that benefit when people stay at home. New York City-exposed stocks are reversing gains from earlier this week after positive vaccine news from Moderna (NASDAQ: MRNA ) Inc. added to last week’s optimism about a return to pre-pandemic city living.

The city said the decision to shut down in-person instruction was made out of caution even though the virus has been absent from most classrooms, and the infection rate from conducting tens of thousands of random tests in city schools has remained below 1%.

The order doesn’t apply to the city’s private schools, some of which have been offering in-class instruction to their youngest learners. In Manhattan, Lyceum Kennedy French American School plans to remain open, according to a letter from its chief operating officer to parents. All 69 Catholic schools in Brooklyn and Queens are staying open as well, according to a Twitter post. Read more: Private Schools Chart Own Path as De Blasio Shuts NYC System

De Blasio’s announcement sparked confusion, because it came shortly after Cuomo had said the city’s average positivity was 2.5%. When asked about the disparity, Cuomo said there are “complex” differentials in state and city numbers that have to do with timing.

Cuomo also noted that a 3% rate calculated by the state would put New York City in a designated orange zone that would have to shut indoor dining, gyms and other “high-risk,” nonessential businesses.

The governor, who has the authority to stop schools from shutting, said he wouldn’t interfere with a 3% threshold that was agreed upon by city officials, parents and teachers. At the same time, he urged them to consider amending their plan to factor in the schools’ infection rates as well as the city’s.

Closing the schools “has ancillary consequences that people don’t often think about,” the governor said. “You close the schools, you make it much harder for parents to go to work. Now they have to worry about who’s going to take care of the children.”

Schools across the U.S. have been open for weeks, and so far relatively few appear to have spread Covid-19 among students or into wider communities. So far, the schools’ experience suggests that children are not major spreaders of the virus among each other, their families and others, as had been initially feared. Instead, they are more likely accurate reflections of conditions in the broader community.

“You can’t really pull the school out from the community,” said Walter Gilliam, an education policy researcher at the Yale School of Medicine. “If the transmission rates are too high, there’s just almost nothing they could do to keep it from getting into schools.”

United Federation of Teachers President Michael Mulgrew, who represents the city’s more than 90,000 public school staff, said the 3% threshold was established “to make sure that schools did not become centers to spread the coronavirus.” He called on New Yorkers to observe social distancing rules, wearing masks and other steps to “lower the infection rate so school buildings can re-open.”

The 3% standard is part of the schools’ multiple lines of defense including masks physical distancing and hygiene. Officials don’t have enough information to know which rule could be scrapped or modified without risking a crisis, Jay Varma, de Blasio’s senior public health adviser, said Friday in an interview.

“Our standard of evidence has to be higher than a guess,” he said. “We can’t say for sure that if we remove one part of this protocol that we can absolutely guarantee everything as safe.”

On Wednesday, De Blasio said the city came back from a worse situation last spring and will reopen the schools. 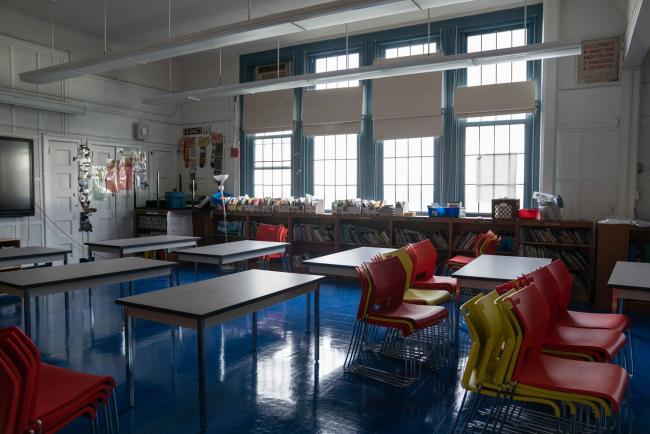