By Andrea Shalal and Doina Chiacu

PITTSBURGH (Reuters) -President Joe Biden stopped to look at a Pittsburgh bridge that collapsed just hours before he arrived for a scheduled visit to the city on Friday, dramatically underscoring the urgency of his drive to rebuild the United States' creaky infrastructure.

Visibly moved, Biden gazed across a ravine over the buckled sections of the half-century-old Fern Hollow Bridge, flanked by Pennsylvania and local officials and emergency workers as he surveyed the damage.

"The idea that we have been so far behind on infrastructure, for so many years -- it's just mind-boggling," the president told them.

One emergency worker described the scene after the collapse as loud as a jet engine. Biden praised the work of rescuers, noting a natural gas leak that was not stopped until some 30 minutes after first responders arrived at the scene.

"They helped the firefighters that were here initially on scene, also did like a daisy chain, with hands just grabbing people and pulling them up," Jones said.

Ten people suffered minor injuries, including four who were taken to the hospital, city officials said. Jones added that crews would search under the bridge for any victims.

The incident was a high-profile example of the need to rebuild the nation's aging bridges, highways and other infrastructure with money from $1 trillion spending bill https://www.reuters.com/world/us/biden-needing-boost-sign-1-trillion-infrastructure-bill-2021-11-15 that was a signature achievement of Biden's first year in office.

Images of the collapse showed the four-lane span buckled into three large sections, with several vehicles piled in the rubble of the collapsed roadway at the bottom of the ravine. The tail end of a long, red city bus appeared trapped by the rubble.

The massive gas leak caused by the collapse forced the evacuation of several families from their homes before being brought under control, Jones said.

The U.S. National Transportation Safety Board said it was sending a team to the site.

The collapse came just two weeks after Pennsylvania got $327 million from the U.S. Department of Transportation for bridge repair as part of the Biden administration's new infrastructure law. Pennsylvania's share of the bridge-repair money is the third-largest state allocation, behind only California and New York.

Biden said he was astonished to learn Pittsburgh had more bridges than any city in the world. "And we're going to fix them all," he said before leaving the site.

Biden, whose approval ratings have fallen in recent months amid a surge in the COVID-19 pandemic and inflation, got a boost on Thursday when the Commerce Department reported the U.S. economy grew the fastest https://www.reuters.com/world/us/us-economy-regained-speed-q4-2021-growth-best-since-1984-2022-01-27 in nearly four decades in 2021.

Economists say Biden-backed fiscal stimulus, including the $1.9 trillion American Rescue Plan that pumped money into states for COVID relief and into households in the form of stimulus payments, played a big role.

In Pittsburgh, the president toured Mill 19, a former steel mill building now serving as a research and development hub, and said he was taking stock of what he had accomplished so far.

"Making it in America is what built this city, the steel city," he said. Pittsburgh understands the consequences of what happens "when we ignore the backbone and fail to invest in ourselves."

The Democratic president was returning to the site of his first major campaign event in 2019 and his first stop after he was inaugurated. The state is a crucial battleground for Democrats to retain control of the Senate in the 2022 midterms.

He touted the creation of 6.4 million jobs and 367,000 manufacturing jobs since he took office a year ago, and the passage of the infrastructure bill -- a rare bipartisan victory in a deeply divided Congress. 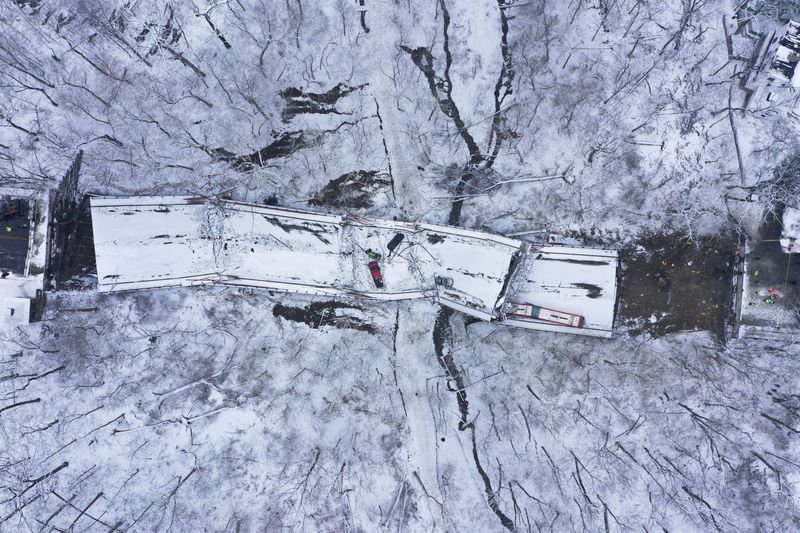 "It takes a federal government that doesn't just give lip service" to buying American, he said. "Now we're beginning to see the results."