(Bloomberg) -- With sanctions on Russia sending the ruble plunging and keeping stock markets shuttered, the country’s wealthy are turning to luxury jewelery and watches in a bid to preserve the value of their savings.

Sales in Bulgari SpA’s Russian stores have risen in the last few days, the Italian jeweler’s chief executive officer said, after the international response to its invasion of Ukraine severely restricted the movement of cash.

“In the short term it has probably boosted the business,” Jean-Christophe Babin said in an interview with Bloomberg, describing Bulgari’s jewelery as a “safe investment.”

“How long it will last it is difficult to say, because indeed with the SWIFT measures, fully implemented, it might make it difficult if not impossible to export to Russia,” he said, referring to restrictions on Russian access to the SWIFT financial-messaging system.

Bulgari, owned by LVMH (PA: LVMH ) SE, is far from alone. Richemont’s Cartier is still selling jewelery and watches, Swatch Group’s Omega timepieces are still available, as are Rolexes. All are continuing to make sales and trying to strike an apolitical stance.

“We are there for the Russian people and not for the political world,” Babin said. “We operate in many different countries that have periods of uncertainty and tensions.”

Much like gold, which can serve as a store of value and a hedge against inflation, luxury watches and jewelery can hold or even increase in price amid economic turmoil caused by war and conflict.

Popular watches can change hands on the secondary market for three or four times their retail price. Yet the impact of the invasion on the value of luxury items is creating a potential public relations issue.

“It is true that luxury brands could decide not to serve the Russian market. Rationally, this would be a cost to them, possibly outweighed by the positive communication image they get in other markets,” Bernstein analyst Luca Solca said by email.

Sales in Russia and to Russians abroad account for less than 2% of overall revenue at LVMH and Swatch Group (SIX: UHR ) and less than 3% at Richemont (JO: CFRJ ), a “relatively immaterial” level, according to a report this week by Edouard Aubin and fellow analysts at Morgan Stanley (NYSE: MS ).

That’s due, in part, to Russian income and wealth disparities, with a small number of billionaire oligarchs living way beyond the means of ordinary people. The average monthly wage in Moscow is about 113,000 rubles ($1,350 at pre-invasion exchange rates), and much lower in rural regions.

A spokesperson for Swatch Group said the company was monitoring the situation in Russia and Ukraine very closely and declined to comment further. Spokespeople for Richemont, Rolex, Hermes, LVMH and Kering (PA: PRTP ) declined to comment.

Pressure on the major brands is growing. Trade publication Business of Fashion, backed by LVMH, urged retailers to shut down Russian stores and not to ship products online. In a widely shared editorial, Editor-in-chief Imran Amed said the move would be “largely symbolic” but that it would show “commitment to a strong moral position.”

Reaction has been minimal, so far. Balenciaga, a Kering SA brand whose creative director Demna Gvasalia is Georgian, scrapped all fashion content from its Instagram page days before its its autumn/winter show in Paris. In its place is the Ukrainian flag and a call to donate to the World Food Program.

Bulgari, established in 1884 by Sotirio Bulgari and bought in 2011 by LVMH, is likely to raise prices in Russia at some point, according to the CEO.

“If the ruble loses half of its value, our costs remain euro costs, we cannot lose money on what we sell, so will have to adapt the prices,” he said.

Whatever sales bump they experience, luxury watch and jewelery-makers may soon have difficulty restocking stores. Moscow closed its airspace to European Union countries, and the continent’s biggest logistics firms have halted shipments to Russia.

Bulgari plans to keep its stores open and forge ahead with the development of a new hotel in Moscow despite the war. Nevertheless, if the crisis lasts for months “it would be difficult to supply the country,” Babin said. 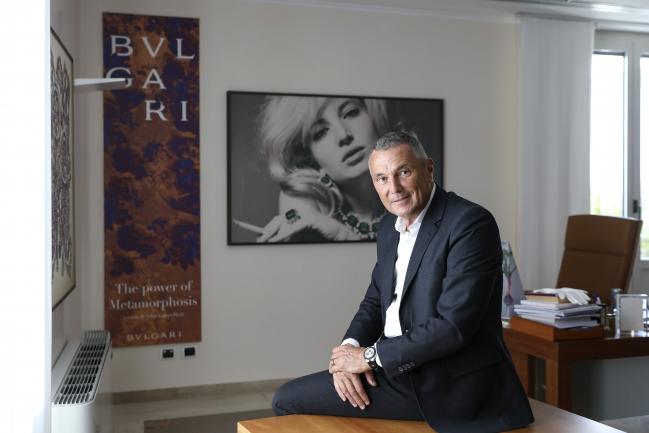