(Reuters) -The Russian rouble rose on Monday, reversing earlier losses, and the MOEX benchmark stock index climbed to levels last seen before Russia sent thousands of troops into Ukraine, as markets awaited a new round of talks between Moscow and Kyiv.

Investors were watching developments around what Russia calls "a special military operation" in Ukraine that started on Feb. 24, as well as risks of new western sanctions against Moscow on top of unprecedented penalties already imposed.

French President Emmanuel Macron said on Monday that a new round of sanctions targeting Russia was needed.

"Developments around Ukraine after the weekend again increase the degree of confrontation with the western countries," Rosbank analysts said in a note.

"Russia and Ukraine talks are set to continue this week. Despite a threat of fresh sanctions, we expect the rouble to remain stable and trade at around current levels amid capital control measures," Alfa Bank said in a note.

In recent weeks, the rouble got a boost from capital controls as well as from President Vladimir Putin's demand that European consumers of Russian natural gas pay for it in roubles.

But Europe vowed to stay united against Moscow's demand, as the threat of an imminent supply halt eased.

The rouble was expected to stay within a range of 80-90 to the dollar in the next two weeks, Promsvyazbank analysts said in a note.

The market was also scrutinising Russia's ability to continue servicing its foreign debt. On Monday, Russia is due to pay $552 million on maturing 2022 Eurobond and $84 million in a coupon payout on 2042 Eurobond.

In the stock market, jittery trading continued, but nearly all blue chips were in the black after the market reopened last week following a near month-long hiatus. 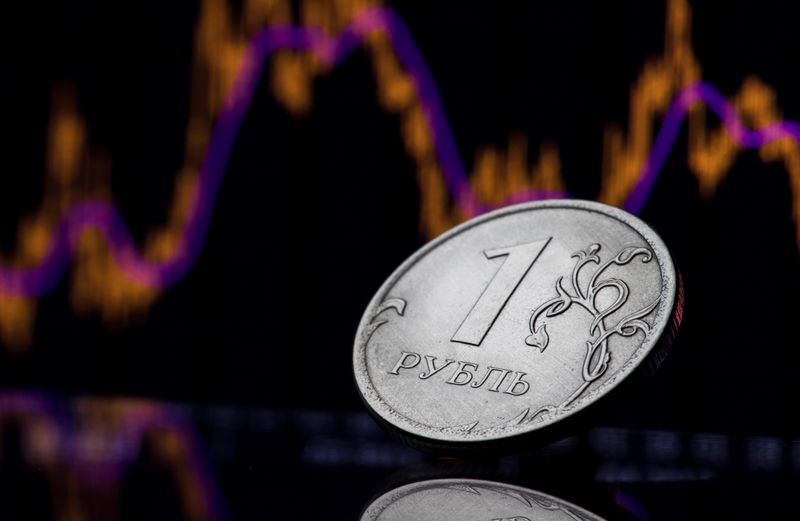 Finam brokerage said in a note it expected the MOEX index to keep on climbing towards a target of around 3,080 points.

Shares in Russia's second-largest sanctioned lender VTB outperformed the market by gaining 7.9% on the day. Its peer, No. 1 lender Sberbank, was up 4.5% .