By Devik Jain and Shashank Nayar

(Reuters) -The S&P 500 and the Nasdaq hit record highs on Thursday on stellar earnings reports, with investors looking past the Federal Reserve's asset tapering plan as borrowing costs remain low.

The Dow slipped from an all-time closing high hit on Wednesday, dragged down by big banks JPMorgan Chase & Co (NYSE: JPM ) and Goldman Sachs Group (NYSE: GS ) which slipped 1.7% and 2.6% despite steepening of the yield curve. [US/]

Shares of Qualcomm (NASDAQ: QCOM ) Inc jumped 11.4% after the chipmaker forecast better-than-expected profit and revenue for its current quarter.

Rival Nvidia Corp also climbed 9.9% to provide the biggest boost to the S&P 500 and Nasdaq, while the Philadelphia SE semiconductor index added 2.1%.

Three of the 11 major S&P sectors advanced. Financials and healthcare declined more than 1%.

On Wednesday, a widely expected move by the Fed on announcing its plan to start tapering its monthly bond purchases beginning this month while staying patient on raising interest rates also helped sentiment.

"We have had a very strong earning season and the Fed has followed through on what it was preparing markets for and investors generally get happy if they get what they expect," said Randy Frederick, managing director of trading and derivatives for Charles Schwab (NYSE: SCHW ) in Austin, Texas.

"The last time the Fed tapered, it took more than a year for it to hike rates and it looks like that's what is going to happen going ahead too, with only one-third of the market factoring hikes next year."

Data showed the number of Americans filing new claims for unemployment benefits fell to a fresh 19-month low last week. It will be followed by a more comprehensive nonfarm payrolls report on Friday. 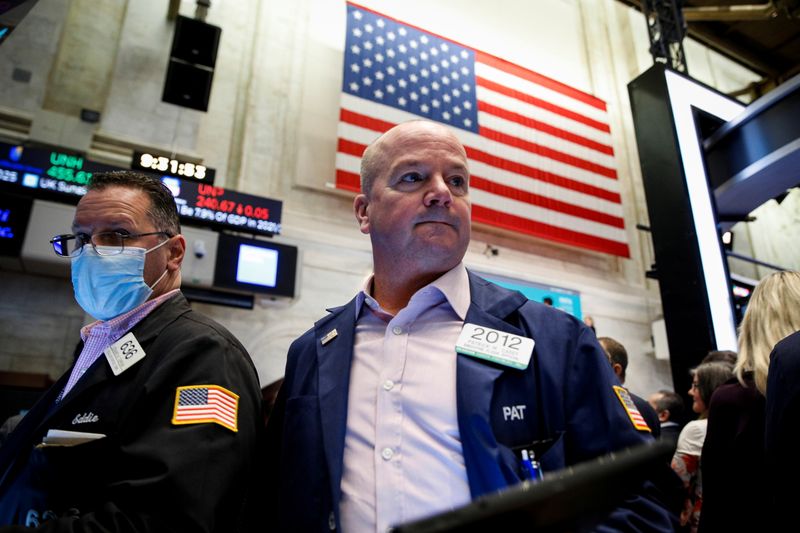