LONDON (Reuters) - Sterling and the euro fell on Thursday as Prime Minister Liz Truss defended her government tax-cutting budget, while relief at the Bank of England's intervention in bond markets faded.

The British currency jumped the most since mid-June on Wednesday after the BoE announced an emergency bond-buying plan to shore up a gilt market that had been in freefall with the pound. But data showed UK bond liquidity improved only slightly after the BoE intervention.

"The moves in cable where huge yesterday and while that hasn't been matched today, it makes it difficult to draw strong conclusion above the intra-day direction of the pound," said Jane Foley, Head of FX Strategy at Rabobank London.

Appearances from BoE officials David Ramsden, Silvana Tenreyro and Huw Pill later on Thursday will be closely watched, as will an address by finance minister Kwasi Kwarteng to his Conservative Party on Monday.

"Sterling is not out of the woods," said DBS currency strategist Philip Wee. "The BoE is seen addressing the symptom and not the cause."

"The ... government has yet to address the credibility of the tax cut plans, which critics see adding to the inflation woes."

The euro trimmed some declines after weakening as much as 1% in earlier London trading. It was last down 0.2% at $0.9720.

Data showed euro zone economic sentiment fell sharply and by more than expected in September as confidence dropped among companies and consumers, who are also downbeat about price trends in the coming months.

The euro had weakened slightly after separate data showed Spain's annual inflation slowed down to 9% in September from 10.5%.

Investors will be closely watching German inflation figures due at 1200 GMT for an indication on the European Central Bank's rate hike path.

"Unless there is a complete surprise it is only going to affect the euro exchange rates marginally though, as the ECB is signalling very clearly at the moment that it will react to high inflation levels with decisive rate hikes," said Esther Reichelt, FX analyst at Commerzbank (ETR: CBKG ).

Consumer prices in the German state of NRW rose by 1.8% month-on-month in September, the highest monthly spike since March, and were up by 10.1% year-on-year.

The dollar index , which measures the greenback against sterling, the euro and four other peers, flattened at 112.98, but stood not far below its 20-year high of 114.78, after having its worst day since March 2020 on Wednesday.

Official pushback is growing stronger, particularly in Asia where Japan, South Korea, India and Indonesia have been intervening in financial markets, to varying degrees, to support their currencies and asset prices. 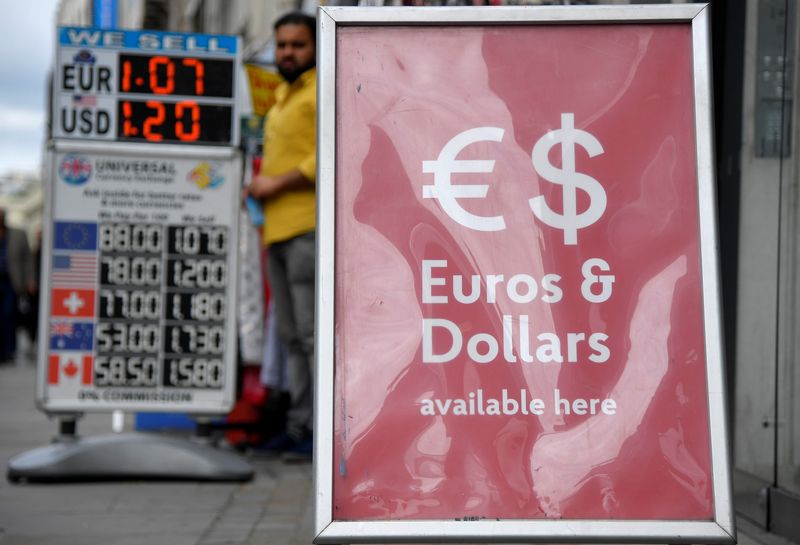 Elsewhere, China's offshore yuan bounced about 0.5%to 7.1280 per dollar after Reuters reported state banks have been told to stock up for yuan intervention.

The risk-sensitive Australian dollar sank 0.6% to $0.6485. A new measure of consumer prices showed annual inflation eased a bit from August to July, offering hope that cost pressures might be close to a peak. [AUD/]