(Bloomberg) -- Xiaomi Corp's (HK: 1810 ) market debut has failed to convince investors that it’s capable of shedding a reliance on cheap phones and becoming an internet giant. The Chinese smartphone giant now faces intense scrutiny while it tries to prove it should be twice as expensive as Apple Inc (NASDAQ: AAPL ).

After raising $4.7 billion in an initial public offering selling stock at the bottom of its marketed range, the first day of trade saw the shares slide as much as 6 percent in Hong Kong. The IPO had been touted as the culmination of a remarkable turnaround and the starting gun for a clutch of mega debuts but it came amid sliding markets and an escalating trade spat between the U.S. and China.

Co-founded by billionaire Lei Jun, Xiaomi has a market value of about $50 billion, a far cry from the $100 billion touted last year. The 1.2 percent slide at the close of trade is the worst first-day performance for a $1 billion-plus Hong Kong IPO since 2015.

Such a high-profile stumble may have a chilling effect on a swathe of Chinese tech corporations keen on raising capital to fuel their ambitions, from Meituan Dianping in Hong Kong to Tencent Music in the U.S. It’s a disappointing showing for an eight-year-old smartphone label with designs on expanding globally and transforming from a low-margin hardware company into an internet services player in Apple’s mold.

Xiaomi priced its IPO at earnings multiples higher than more established tech giants, including Apple, Tencent Holdings Ltd (HK: 0700 ) and Facebook Inc (NASDAQ: FB )., arguing it was an internet services company even as most of its revenue came from hardware. It then suffered a number of setbacks, from being forced to jettison plans to sell Chinese depositary receipts in Shanghai to the onset of trade tensions.

“It will be hard to convince investors,” said Elsie Sheng, an analyst with Orient Finance Holdings. “Although it claims to be an internet company with lots of big data-related businesses, it remains a hardware company in terms of source of revenue. Even in smartphones, most of the devices it sells are lower-end products.”

In the longer term, Xiaomi’s proponents argue that dominance in markets from India to China and a diversifying Internet of Things business will help it grow into its valuation. As Lei Jun struck the opening gong Monday, he continued pitching Xiaomi as an “internet company.”

While $50 billion isn’t insignificant for a company many wrote off when sales flatlined in 2016, it’s still barely grown from its $46 billion valuation from a 2014 fundraising round. Goldman Sachs Group Inc (NYSE: GS )., Morgan Stanley (NYSE: MS ) and CLSA Ltd. were Xiaomi’s joint sponsors.

“Tech companies looking to list their shares will need to take a more conservative approach in pricing,” said Anthea Lai, an analyst with Bloomberg Intelligence. That’s “as investors get more cautious about where to put their money given the prevailing trade tensions and several IPO flops recently.”

Xiaomi’s tribulations began almost the moment it embarked on its IPO journey. It’d planned on raising about $10 billion at a valuation of as much as $100 billion by taking advantage of CDRs: an instrument Beijing pushed to entice companies to list at home. But that fell apart when it couldn’t adequately address questions posed by regulators.

Regardless of market gyrations, the company has amassed billions to bankroll Lei’s vision of embracing technology from artificial intelligence to cloud computing, pitting itself against Alibaba (NYSE: BABA ) Group Holding Ltd. and Baidu Inc (NASDAQ: BIDU ). It’s a far cry from a year or so ago, when the billionaire prompted a bout of internal soul-searching via a heartfelt missive to employees.

Selling phones into overseas developed markets might be a more realistic goal, given Xiaomi’s growing credibility with affordable but reliable devices, than building a full-fledged internet content and services wing.

“It really depends on the speed of growth -- that’s the open question right now,” Ryan Roberts, a senior analyst for MCM Partners, told Bloomberg Television. “If they can maintain that, that’s going to bring margin expansion just from the revenue mix.”

Lei, who once drew comparisons in domestic media to Steve Jobs, has resumed taking potshots at Apple. On Monday, the billionaire made it a point to thank his deep-pocketed backers and the 190 million monthly active users known as Mi Fans.

“Although the macro-economic conditions are far from ideal, we believe a great company can still rise to the challenge and distinguish itself,” Lei told a packed audience at the Hong Kong Stock Exchange.

To contact Bloomberg News staff for this story: Gao Yuan in Beijing at ygao199@bloomberg.net;Natalie Lung in Hong Kong at flung6@bloomberg.net

To contact the editors responsible for this story: Robert Fenner at rfenner@bloomberg.net, Edwin Chan 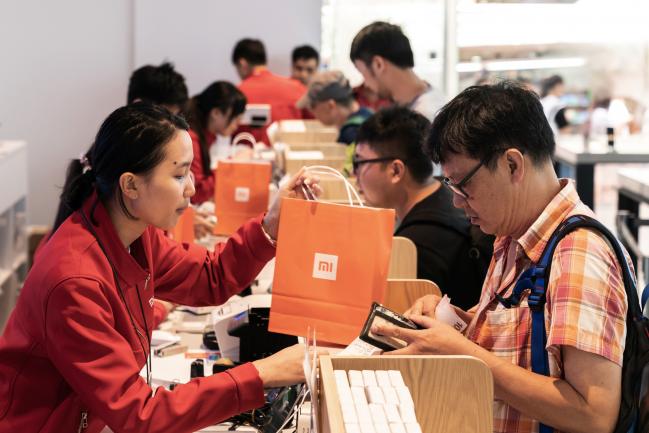