Losses for the ARK fund have accelerated in recent days, fueled by a rise in Treasury yields that has hit the broader universe of technology and growth stocks in the wake of the Federal Reserve’s monetary policy meeting last week. The central bank took a hawkish tilt at that meeting, which some interpreted as a vote of confidence in the U.S. economy.

“Anytime we see the 10-year UST yield move such a dramatic amount in a short period of time ... it generally coincides with a market sell-off of some magnitude,” said Brian Price, head of investment management for Commonwealth Financial Network, in a note. “It is not surprising to see value and cyclical stocks hold up better than their growth counterparts given the increase in yields.”

While rising bond yields tend to reduce the relative attractiveness of many stocks, they can particularly weigh on tech and other growth names whose valuations rely more on future cash flows, which are discounted more severely as bond yields rise.

Though stock indexes remain near record highs, many individual names have struggled in recent weeks. Half of S&P 500 stocks were down 10% or more from their 52-week highs as of Tuesday afternoon. That included over 60 stocks that had fallen 20% or more.

Wood’s fund, which was the best-performing U.S. equity fund in 2020, is down about 10% so far this year, while the S&P 500 has gained nearly 16%. The ARK Innovation ETF ranks in the lowest percentile year-to-date among 601 mid-cap growth funds tracked by Morningstar.

The high-growth names that helped Wood reap outsized gains during last year’s coronavirus lockdowns have hurt the fund’s performance in 2021, with so-called stay-at-home stocks such as Teladoc Health and Roku losing their luster as investors have turned to financials, energy companies and other economic reopening plays at various times over the last few months.

“What worked for the fund in 2020 has not persisted even if the long-term trends favored by ARK remain relevant,” Todd Rosenbluth, head of ETF & mutual fund research at CFRA, said in an emailed comment.

Earlier this month, Wood reiterated her call that slowing economic activity in the United States will bolster growth stocks.

Short interest in the ARK ETF amounts to 21.41 million shares, or 11.9% of the float, with short interest declining by 1.1% in the past week as shorts have covered their bets, according to Ihor Dusaniwsky, managing director of predictive analytics at S3 Partners. 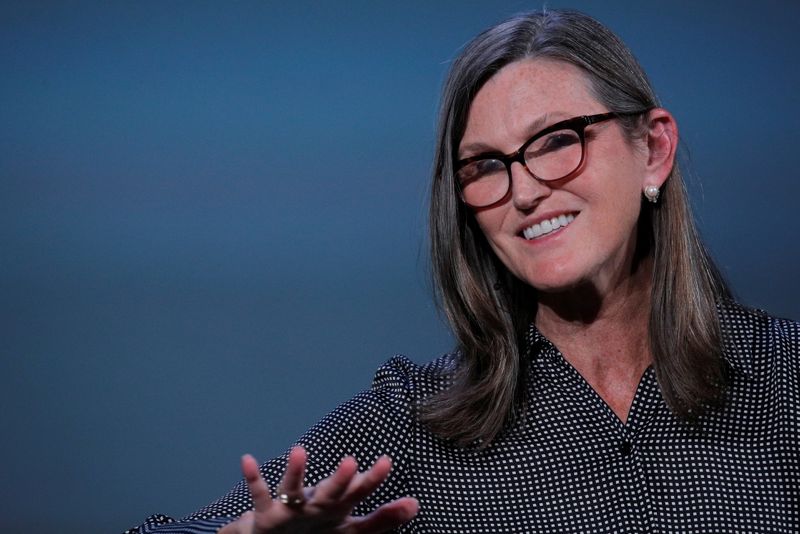 The fund’s top holdings include electric car maker Tesla (NASDAQ: TSLA ) Inc as well as virtual health company Teladoc and television streaming firm Roku. While Tesla has climbed 10% in 2021, Roku has slumped 6.5% and Teladoc shares have dropped some 35%.

Last week, China's moves to crack down on bitcoin trading dealt another blow to the fund, which lists cryptocurrency trading firm Coinbase (NASDAQ: COIN ) Global Inc as its fifth-largest holding. Since its inception in 2014, the ARK fund is up about 450% against a gain of roughly 115% for the S&P 500, and ranks in the top percentile in its category of funds tracked by Morningstar over a five-year period.