McDonalds versus Burger King. Apple versus Microsoft. Coca-Cola versus Pepsi. The business world is riddled with rivalries. A new one may be taking shape as Volkswagen (ETR: VOWG_p ) tries to unseat Tesla (NASDAQ: TSLA ) as the leading maker of electric cars.

VW is in a “good second position” behind Tesla on EVs and making progress on battery production, charging infrastructure and software, Chief Executive Officer Herbert Diess said Wednesday at a tech conference in Berlin. “We think we can close the gap a little bit in the next months,” he said. Europe’s biggest automaker could overtake its US rival as soon as 2024, Bloomberg Intelligence analysts predicted last week.

Elon Musk disputed this Tuesday during the Qatar Economic Forum, telling Bloomberg News Editor-in-Chief John Micklethwait that he “would not agree” with the forecast. He instead praised Chinese carmakers before saying that at Tesla, “we don’t really think about other competitors.”

I’m not so sure about that. Many of Tesla’s competitors long laughed it off as an upstart on feeble financial footing before their electric about-faces, so it must feel good to still be miles ahead when it comes to selling battery-powered cars. But Musk himself has acknowledged VW is rapidly electrifying, and has praised Diess for doing so. He’s clearly paying close attention.

Tesla delivered more than 936,000 EVs worldwide last year, while VW sold some 453,000 fully electric cars. Musk has christened new factories this year in Austin, Texas, and near Berlin — the latter is basically in VW’s backyard — and Tesla is on track to produce more than 1.5 million vehicles this year, Musk said in April.

Still, the Germans are pushing hard to catch up. VW has earmarked some €52 billion ($55 billion) through 2026 to develop and produce electric cars. This includes setting up a new €2 billion EV factory in Germany and plans to build up six battery factories across Europe, several of which will involve partnerships. It’s also making a bold move to gain market share in the US, where it’s reviving the defunct brand Scout with rugged electric SUV and pickup models.

It’s noteworthy that Tesla’s Austin and Berlin plants have been experiencing teething problems, losing “billions of dollars” as they try to ramp up, Musk said in a May 31 video interview released Wednesday. During the Qatar event, Musk detailed his decision to cut costs by dismissing about 10% of Tesla’s salaried employees over the next three months, or about 3.5% of its global workforce. VW and Tesla have also suffered from Covid-related lockdowns at their factories in China, but recent remarks from Musk and Diess suggest the situation is improving.

Tesla still trumps VW on Wall Street. Even after the recent rout, the US carmaker is valued at around $734 billion — more than eight times VW’s market capitalization. The Germans do have an ace up their sleeve making slick sports cars.

VW is sticking to plans to list its Porsche (ETR: PSHG_p ) unit in the fourth quarter, CFO Arno Antlitz told my colleague Elisabeth Behrmann on Wednesday at a Bloomberg-organized finance conference in Frankfurt. The Porsche listing is poised to be one of Germany’s biggest-ever IPOs and could value the business at as much as €90 billion. Porsche is a highly profitable brand and is far along in its electric transformation, with its Taycan EV already outselling the legendary 911.

It’s a bold move charging ahead with the share sale given that IPOs globally have slowed dramatically this year. Investors are shying away from risks because of the war in Ukraine, rising interest rates and runaway inflation. Swiss firm ABB on Monday postponed the $750 million listing of its EV charging business until the market improves.

Antlitz pitched Porsche as a safe haven for investors eager to sidestep the drop in tech and EV stocks, arguing the brand has proven resilient in the face of disruptions.

“There’s still capital out there and there’s a lot of skepticism about investing capital in technology companies, in new ventures,” he said. Porsche, on the other and, “is very solid.” 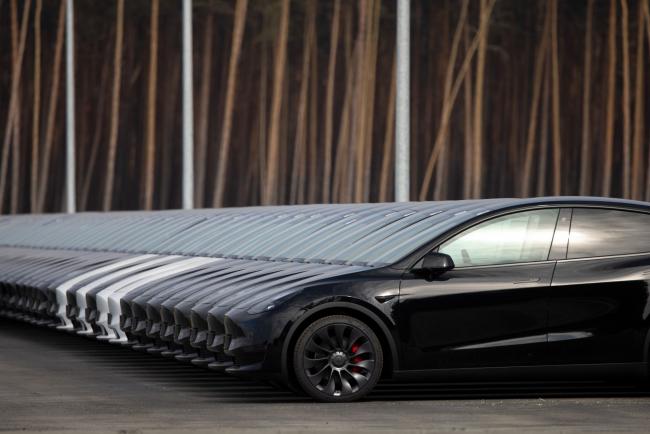