(Reuters) - Tesla (NASDAQ: TSLA ) Inc will accept meme-based cryptocurrency dogecoin as payment for its merchandise such as the "Giga Texas" belt buckle and mini models of electric vehicles, Chief Executive Officer Elon Musk said in a tweet on Friday.

The move, which sent dogecoin prices 14% higher, comes a month after Musk said Tesla would test out the digital token as a payment option.

Musk, a vocal proponent of cryptocurrencies, has heavily influenced prices of dogecoin and bitcoin, and at one point had said the company would accept bitcoin for purchasing its cars before axing plans.

Tesla's merchandise, which also include the recently launched "Cyberwhistle" and "Cyberquad for Kids", are a hit with its fans, and usually sell out within a few hours of listing.

"Some have noted that goods for doge are selling out even faster than for dollars. This news is a good illustration of crypto's continued penetration of corporate culture," said Alex Kuptsikevich, senior financial analyst at FxPro.

Musk's tweets on dogecoin, including the one where he called it the "people's crypto", have turned the once-obscure digital currency, which began as a social media joke, into a speculator's dream. The token's price surged by about 4,000% in 2021.

Tesla disclosed last year it had bought $1.5 billion worth of bitcoin, and Musk has also said he owns some bitcoin and dogecoin. 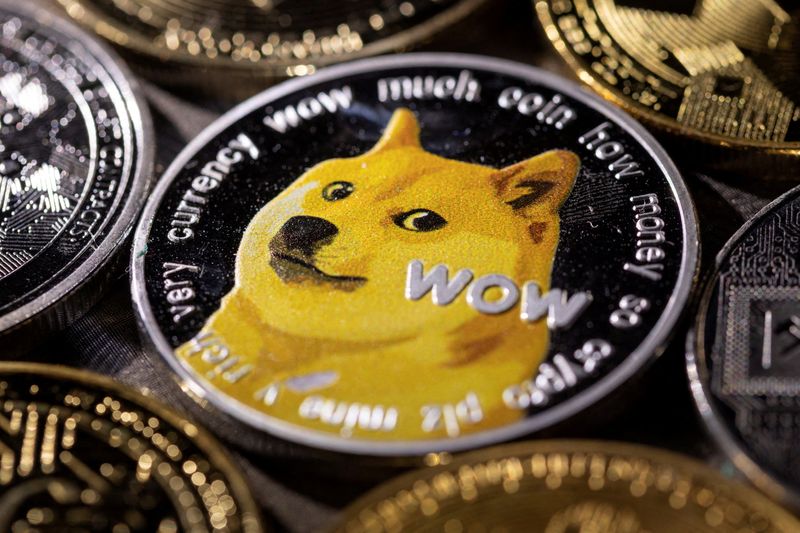 Tesla is facing intense competition as legacy automakers such as Ford Motor (NYSE: F ) Co as well as startups including Rivian Automotive are set to launch their electric cars this year.

Tesla's much-awaited Cybertruck will begin production in the first quarter of 2023, pushing back its plan to start production in late 2022, Reuters reported.