(Bloomberg) -- The Turkish lira resumed its drop as early presidential election results in the U.S. pointed to a closer race than polls had predicted, while traders focused on the prospects for a local interest-rate hike.

The lira joined the retreat among emerging currencies, falling as much as 1.5% to 8.5253 per dollar, its ninth loss in 10 days, before paring the slide to 0.3%. That offset the gains of the previous day, when speculation about a possible interest-rate increase lifted the Turkish currency.

While investors have argued that a win for Donald Trump would help the lira by easing the chance of sanctions against Ankara, the currency was still among the worst performers in emerging markets on Wednesday, even with the incumbent still firmly in the race. Traders are more concerned about the direction of central bank policy, analysts said.

“The market views a Trump victory as mildly supportive -- or less negative -- than a Biden win for the lira,” said Nigel Rendell, a senior analyst at Medley Global Advisors in London. “But the currency dynamics are not being driven by political outcomes thousands of miles away, but by policy inactions by the central bank in Ankara.”

Investors have called for an emergency rate move after policy makers unexpectedly kept rates on hold last month. Measures to tighten liquidity and rates in the repo market without explicitly hiking the benchmark have failed to stem the lira’s decline as geopolitical pressures mounted.

A win for Trump, who has opposed Congressional sanctions against Turkey over the purchase of a Russian missile system, would be a relief for some Turkish assets. Democratic candidate Joe Biden has been critical of the Turkish government, and would probably take a tougher stance than Trump.

“A strong and imminent rate hike from central bank, considering the inflation trend and balance in domestic market, would break the downward trend, regardless of U.S. elections,” Onur Ilgen, an Istanbul-based treasury manager at MUFG Bank Turkey AS, said. “Indecisive central bank moves might further hurt investors’ confidence and open a path for new record lows, no matter what the result of the elections would be.” 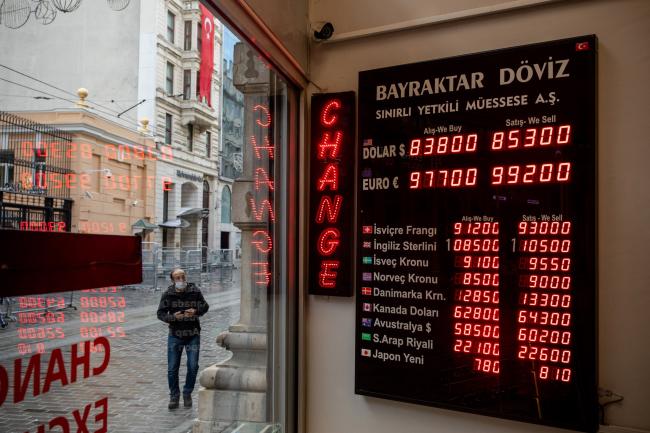