(Reuters) - Ukraine and Russia accused each other on Friday of risking nuclear disaster by shelling Europe's largest nuclear power plant, occupied by Russian forces in a region expected to become one of the next big front lines of the war.

* A European bank has agreed to process a payment for the transit of Russian oil through Ukraine, Slovak refiner Slovnaft and another source familiar with the matter said, removing the cause of a stoppage of oil supplies to central Europe last week.

* The first Ukrainian wheat to be exported under a U.N.-brokered deal was on one of two ships to leave Ukrainian Black Sea ports on Friday, Turkey's defence ministry said. Cargoes on more than a dozen other ships departing over the past two weeks were mostly corn as well as grain for animal feed and fuel.

* Kazakhstan is expected to sell some of its crude oil through Azerbaijan's biggest oil pipeline from September, as the nation seeks alternatives to a route Russia threatened to shut, three sources familiar with the matter said.

* Three civilians, including a boy, were wounded in overnight shelling of Marhanets, a town opposite the Russian-held Zaporizhzhia nuclear plant, Valentyn Reznichenko, governor of the Dnipropetrovsk region, said in the latest in a string of similar reports.

* Ukraine's General Staff on Friday reported widespread shelling and air attacks by Russian forces on scores of towns and military bases, especially in the east where Russia is trying to expand territory held on behalf of separatist proxies.

* Pavlo Kyrylenko, governor of the eastern Donetsk region, said on Telegram seven civilians had been killed and 14 wounded in the past 24 hours.

* Ukraine's security agencies issued a joint statement calling for the United Nations and the International Committee of the Red Cross to send representatives to locations where Russia is holding Ukrainian POWs.

* Blasts this week at the Russian-operated Saki military airfield in western Crimea led to the loss of eight Russian combat jets, Britain said, a fraction of the overall aviation fleet but a blow to Russia's Black Sea capability. 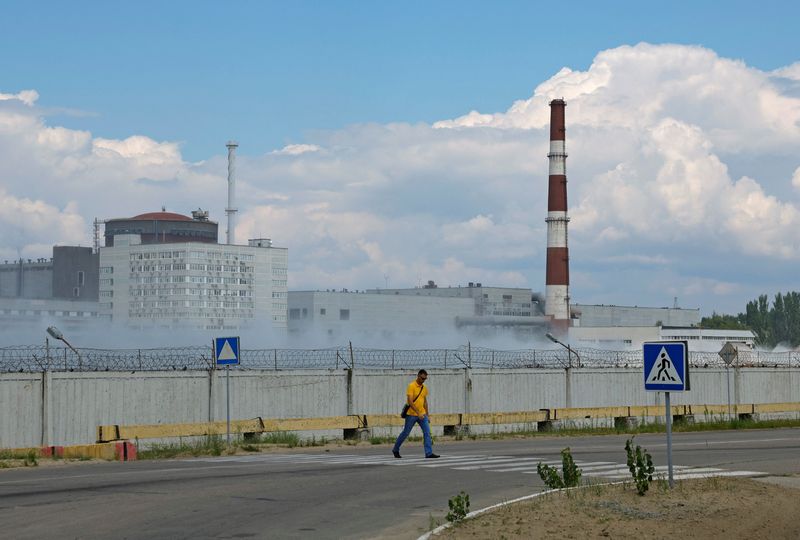 "There's a war going on, and we're talking about nuclear power plant in the middle of a battlefield," U.N. spokesman Stephane Dujarric told reporters on Thursday about the prospect for an inspection by the International Atomic Energy agency.

"I think we can think of at least two or three pages' worth of hurdles."