(Reuters) - Ukrainian troops said they had retaken the key bastion of Lyman in occupied eastern Ukraine, a stinging defeat that prompted a close ally of Russian President Vladimir Putin to call for the possible use of low-grade nuclear weapons.

* Russia said its troops had withdrawn from Lyman to avoid being surrounded by Ukraine's army.

* Ramzan Kadyrov, a Putin ally and head of Russia's Chechnya region, said Moscow should consider using a low-yield nuclear weapon in Ukraine after the loss of Lyman.

* U.S. Defense Secretary Lloyd Austin cheered Lyman's recapture, saying it was an encouraging battlefield success and that the loss of the logistics and transport hub will pose a dilemma for Russia's military.

* The "liberation" of Lyman in the Donetsk region is a key factor for "further de-occupation" in the neighbouring Luhansk region, said its governor, Serhiy Gaidai.

* International Atomic Energy Agency chief Rafael Grossi is expected to hold talks in Moscow and Kyiv in coming days on the creation of a protection zone around the Russian-held Zaporizhzhia plant, the U.N. watchdog said.

* Ukraine's SBU security service said at least 20 civilians were killed in Russian shelling of a civilian convoy in late September in an eastern "grey zone" between Russian- and Ukrainian-controlled territory.

* Italy's Eni said it would not receive any of the gas it had requested from Russia's Gazprom (MCX: GAZP ) for delivery on Saturday, but the firms said they were working to fix this. 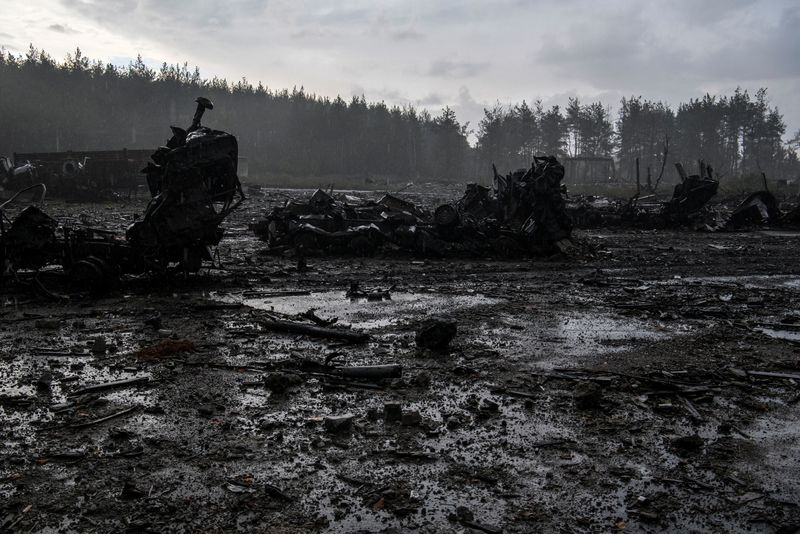 * Russia failed to win enough votes for re-election to the U.N. aviation agency's governing council, in a boost for Western powers that wanted to hold Moscow accountable following its invasion of Ukraine.

* Germany will deliver the first of four advanced IRIS-T air defence systems to Ukraine in the coming days to help ward off drone attacks, Defence Minister Christine Lambrecht said during an unannounced visit to Odesa.