(Bloomberg) -- Sales of new U.S. homes fell in February for a second month, suggesting high prices and rising mortgage rates may be keeping prospective buyers on the sidelines.

Purchases of new single-family homes decreased 2% to a 772,000 annualized pace following a downwardly revised 788,000 in January, government data showed Wednesday. The median estimate in a Bloomberg survey of economists called for a 810,000 rate.

The drop in sales suggests buyers are shying away from the market amid high home prices and rising mortgage rates as the Federal Reserve tightens policy. A recent report showed a measure of homebuilders’ sales expectations for the next six months slumped in March to the lowest since June 2020 amid growing concerns over the combination of rising construction costs and higher interest rates.

“We recognize that interest rates are rising and inflation is a legitimate threat,” Stuart Miller, executive chairman of Lennar Corp (NYSE: LEN )., said on an earnings call last week. Still, the homebuilder reported better-than-expected quarterly orders and raised its forecasts on expectations that demand will continue to outweigh supply.

The new-home sales report, produced by the Census Bureau and the Department of Housing and Urban Development, showed the median sales price of a new home jumped 10.7% in February from a year earlier, to $400,600.

The number of homes sold during the month and awaiting the start of construction -- a measure of backlogs -- rose from January to 209,000, Wednesday’s report showed.

There were 407,000 new homes for sale as of the end of February, the most since August 2008, though roughly 91% were either under construction or not yet started. At the current sales pace, it would take 6.3 months to exhaust the supply of new homes, compared with 4.5 months one year ago.

Regionally, sales rose in the Northeast and Midwest and fell in the South and West. 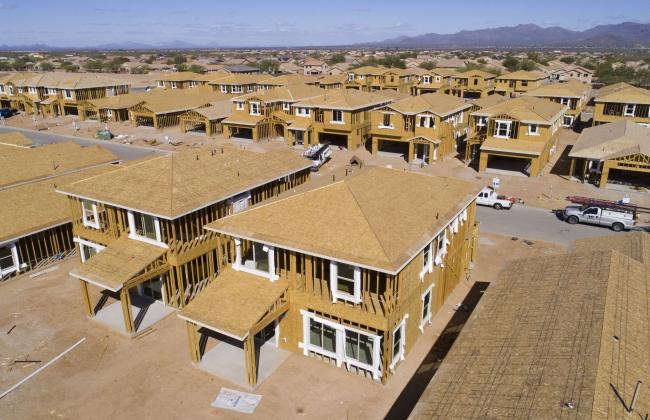