(Reuters) -U.S. stock index futures edged higher on Monday after a week of volatile trading spurred on by mixed quarterly results from big technology companies, while Peloton jumped on media reports of interest from potential buyers including Amazon.

The tech-heavy Nasdaq had a volatile start to February after Facebook (NASDAQ: FB ) owner Meta Platforms lost $200 billion from its market value on disappointing results last week, while Amazon.com Inc (NASDAQ: AMZN ) gained just as much on plans of hiking its Prime subscription rate.

"Markets finished out pretty decently last week after a tough month of January, so it does seem that you had capitulation on that Monday, and since then the market is trying to work its way up," said Thomas Hayes, managing member at Great Hill Capital LLC in New York.

"Higher earnings are helpful in the sense that estimates finally ticked up."

Hasbro Inc (NASDAQ: HAS ) gained 1.9% premarket after the toymaker delivered a strong forecast-beating quarter, bolstered by a recovery in its television production business and price hikes.

Of the 278 companies in the S&P 500 that have posted earnings as of Friday, 78.4% reported above analysts' expectations, according to Refinitiv.

Despite the earnings-driven seesaw in technology stocks, all three major stock indexes ended the first week of February higher.

An unexpectedly strong jobs report last week raised concerns about aggressive policy tightening by the U.S. Federal Reserve ahead of key inflation data for January that is due on Thursday.

Robust inflation data – which hit its highest annual level in nearly four decades in December – could further bolster the case for a hawkish Fed and extend the climb in yields, hurting the nascent recovery in equity markets.

Markets are now pricing in a one-in-three chance the Fed might hike by a full 50 basis points in March and the prospect of rates reaching 1.5% by year end. [FEDWATCH]

Market liquidity in U.S. stocks has fallen to levels last seen during the COVID-19 selloff two years ago, adding to volatility in an already-nervous market. 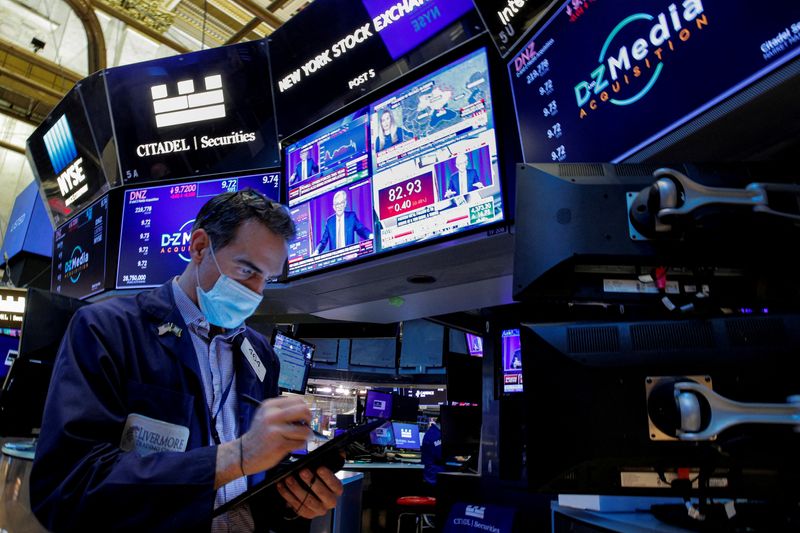