Aside from Bitcoin (BTC) and Ethereum (ETH), there are other digital currencies worth considering for people looking to diversify their portfolios and get experience with new cryptocurrencies. Ripple’s XRP is one of them.

Several major banks and financial services already use XRP, which claims to be a global payments network. As a result, XRP is used in its products to assist in fast currency conversions.

An American technology company, XRP Labs Inc., has developed a real-time cryptocurrency gross settlement system, currency exchange, and remittance network called XRP. The XRP cryptocurrency, which the business describes as a “digital asset tailored for global payments,” was then launched.

Notably, XRP has several advantages over established digital currencies. XRP claims that payments with the XRP coin are cleared within three to five seconds. On the other hand, BTC transactions might take up to an hour to clear, while ETH payments can take up to two minutes.

Banks, universities, individuals, private payment providers, and cryptocurrency exchanges make up the XRP node validators. In addition, XRP does not allow users to spend the same amount of cryptocurrency more than twice. This is because the system deletes all subsequent data after detecting the transaction.

Unlike Bitcoin or Ethereum, the XRP Ledger Network (XRPL) uses a unique Federated Consensus technique to validate transactions. As part of a consensus protocol, selected independent servers called validators agree on the order and outcome of XRP transactions on the XRPL. Through Federated Consensus, all validated transactions can be processed without a single point of failure.

A crypto Youtuber Crypto Jack tweeted that he is thinking about whether to buy more XRP at this price region. This indicates that more buyers willingly invest in XRP, which can increase the price.

Another tweet of David Gokhshtein mentioned that if XRP wins against the SEC, that will leads to the innovative use cases of crypto in real life, where we can expect to see various utilities of cryptocurrency. Thus, we can expect to have a bull run for XRP. 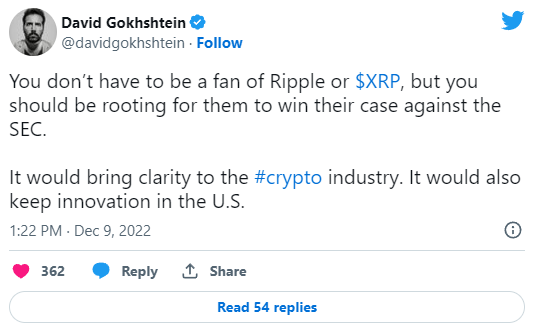 Also we can see that a crypto analyst with over 1 million of followers, Ben Armstrong tweeted they received a bill to overreach the SEC in Ripple lawsuit. Moreover, he mentioned that Ripple played a huge role in saving crypto. 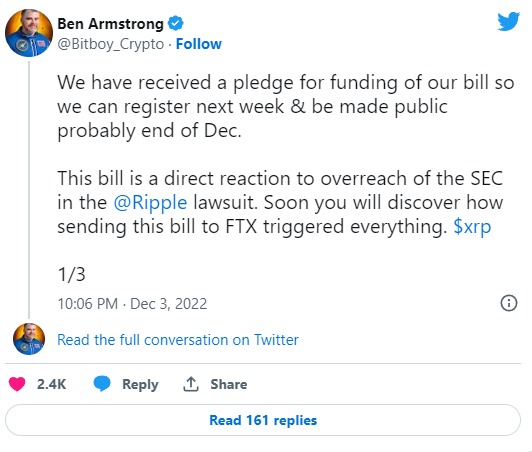 Binance, Bitstamp, Bithumb, Kucoin, and Kraken are currently the most popular cryptocurrency exchanges for XRP (XRP) trading. Let’s continue with our XRP price research for 2022.

Currently, XRP ranks 7th on CoinMarketCap. Will XRP’s most recent improvements, additions, and modifications help the price of cryptocurrencies rise? First, let’s focus on the charts in this article’s XRP price forecast.

When volatility bands are positioned on either side of an asset’s price, the price of XRP (XRP) can be predicted using the Keltner Channel indications for XRP/USDT. It may continue sideways since the candles tend to break out from the second half and rise higher. However, after a few days, it tended to slope negatively inside the second half and now is trading near the middle crossover between the two halves of the channel. If the daily candles stay inside the first half of the channel, we can expect to see XRP at a higher level.

In technical analysis, the relative strength index (RSI) is a momentum indicator. The RSI examines the speed and amplitude of a security’s recent price swings to determine if it is overvalued or undervalued. The RSI value of the 1-Day chart is 52.63. A movement above 50 indicates that more traders are buying XRP rather than selling, driving the price up. Moreover, the RSI value between 50 and 70 denotes that XRP is in a strong trend, with a lot of liquidity in the market.

Above is a daily chart of XRP’s 200-day and 50-day Moving Averages (MAs). XRP has broken out of the 50 MA in the daily chart. However, XRP is trying its back to not fall back under the 50 MA. Notably, the XRP 50-day MA is below the 200-day MA (long-term), indicating that the market is entirely bearish. However, the distance between the two moving averages is getting narrow meaning there is a possibility that a trend reversal is coming soon. It is advisable to wait for a few reversal candles to enter your long trades for a better risk-to-reward ratio.

By looking at the daily chart of XRP/USDT, XRP is going sideways inside its 1 day resistance and support levels. And if it can breakout off its triangle pattern, it can go either up to its primary resistance level at $0.5473 or go bearish.

Meanwhile, our long-term XRP price prediction for 2023 is bullish since it cannot break the support level. We can expect XRP to reach $0.5 this year. 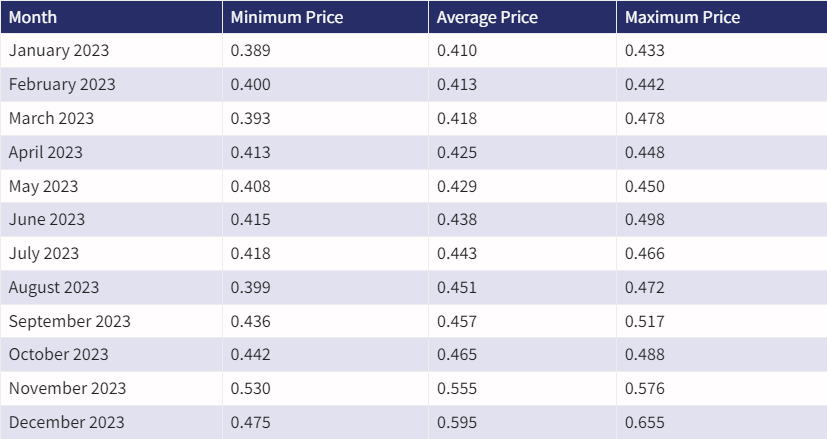 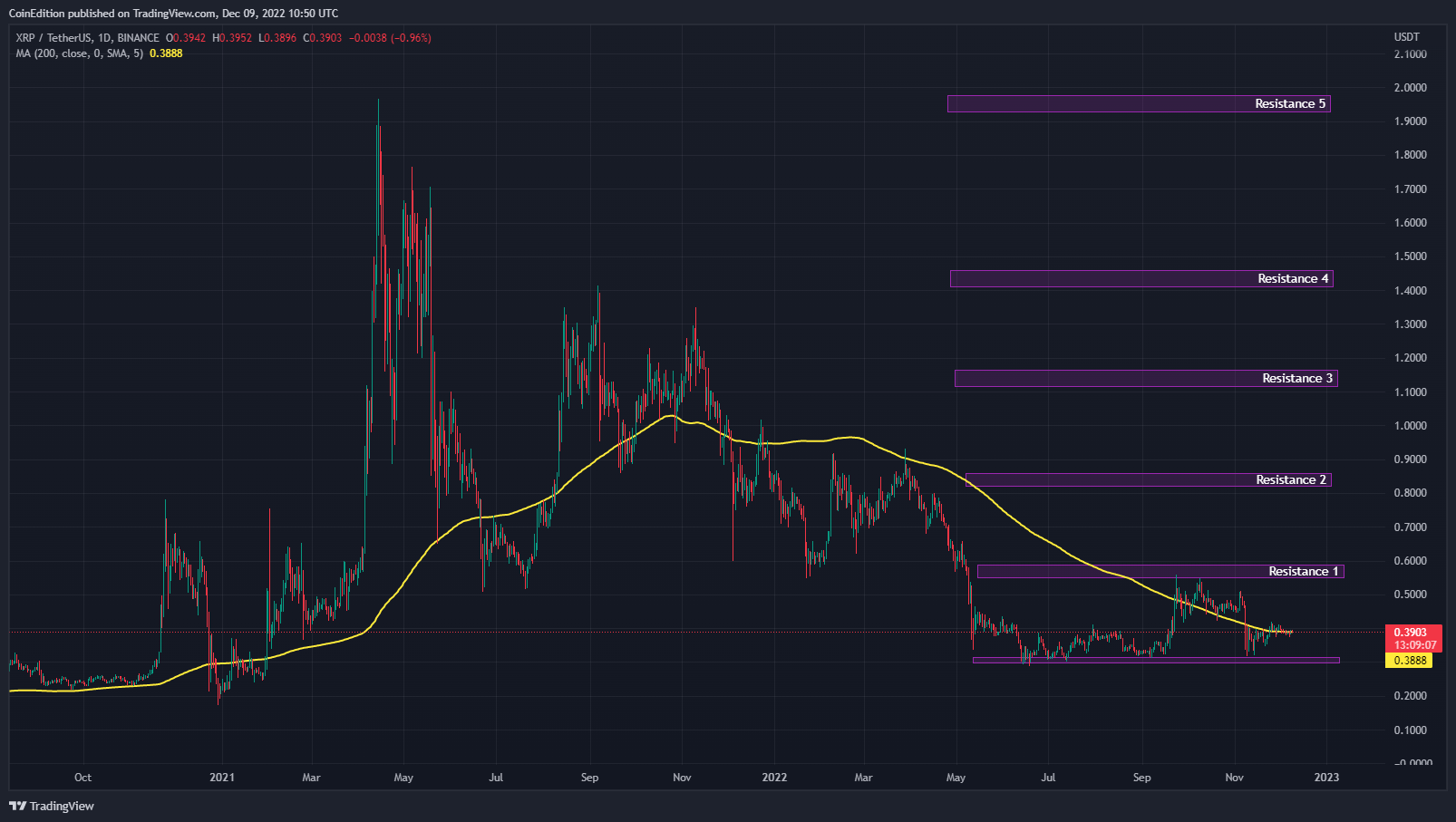 This chart below shows that the price of XRP has decreased in the past few months. Moreover, the price of XRP has been up by 1.22% in the past 24 hours after a significant pump during the week. If this continues, XRP might keep running bulls, breaking its minor resistance at $0.4700, and eventually moving higher to the $0.5500 resistance levels—the bullish signal for 2023.

If XRP cannot break the $0.4700 resistance level, the bears may seize control and dethrone XRP to a downtrend stance. In simple terms, the price of XRP might fall to almost $0.3146, indicating a negative signal given by the previous support level.

XRP (XRP) price can rise to incredible heights, peaking at $0.9346. It is feasible only if the market continues its upward path and XRP breaks through the past psychological resistance levels. 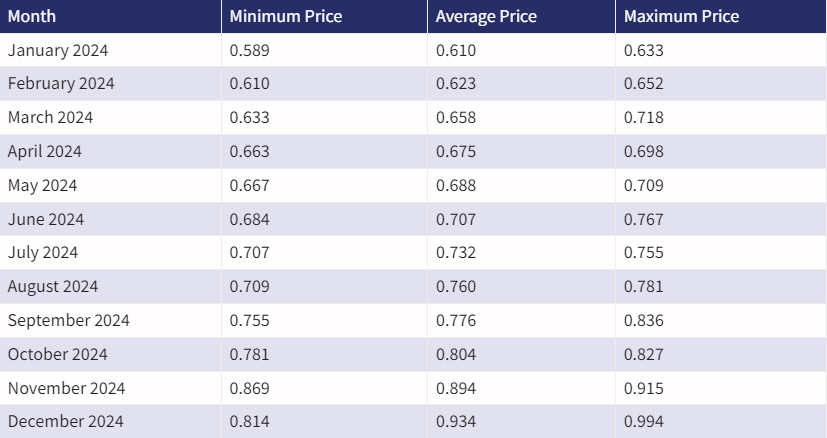 XRP prices might grow to $1.283 during the next three years. This is only feasible if the market continues its upward path and only if XRP breaks through the past psychological resistance levels. 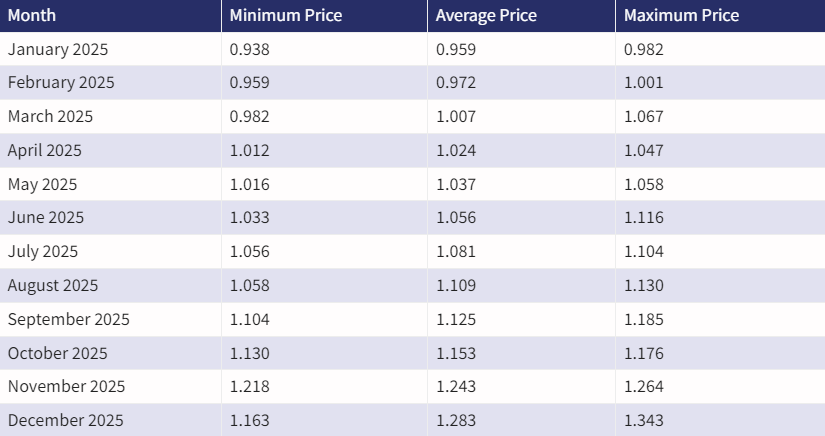 XRP prices might grow to $1.635 during the next four years. The growth will continue after that moderate, but no significant drops are forecast. 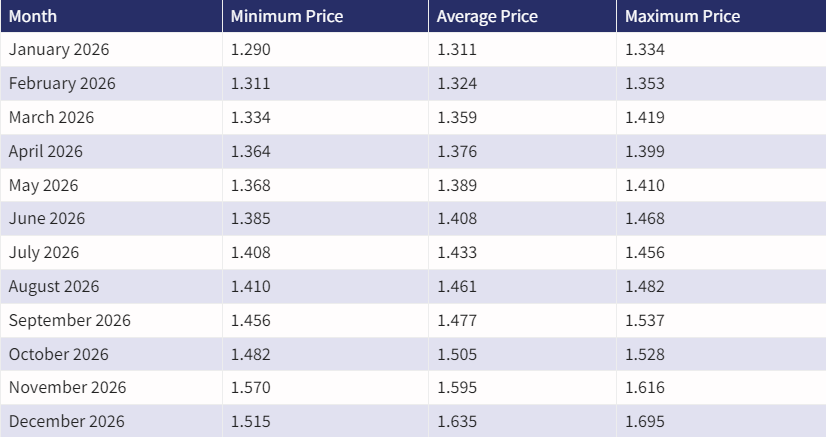 Investors expect a bullish run in 2027 due to the halving of Bitcoin. XRP prices might soar to $2.032 in the next five years. Furthermore, hitting this level may be easy for XRP as other mediums, such as short-term and long-term price objectives for purchase or sell orders, may be discovered. 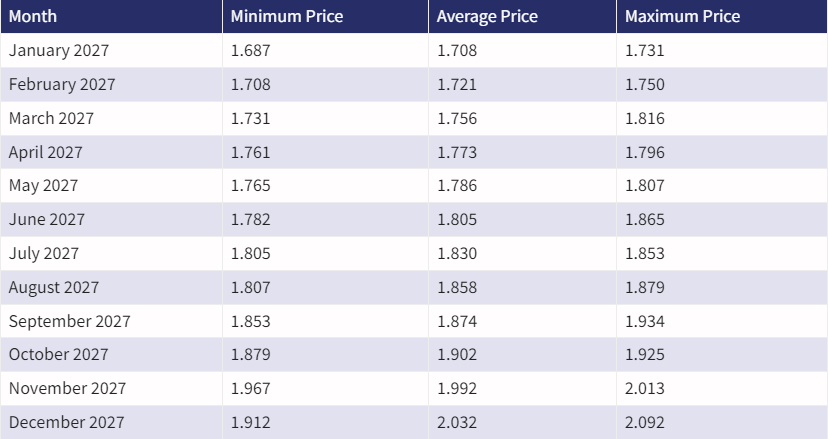 In 2028, Bitcoin halving will occur. Hence, the consolidating market in 2027 could be followed by a bullish run. Notably, the market could attain higher values. In the next five years, XRP prices could rise to $2.545. According to the forecast, XRP has a strong chance of reaching the previous ATH. 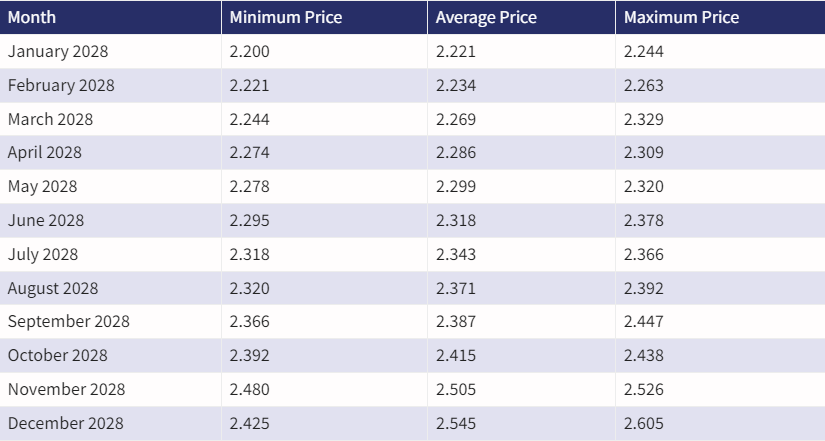 By 2029, there could be much stability in the price of most cryptocurrencies that had stayed for over a decade. This is due to implementing lessons learned to ensure their investors retain the project’s confidence. In the next six years, XRP prices could rise to $2.905. According to the forecast, XRP has a strong chance of reaching the previous ATH. 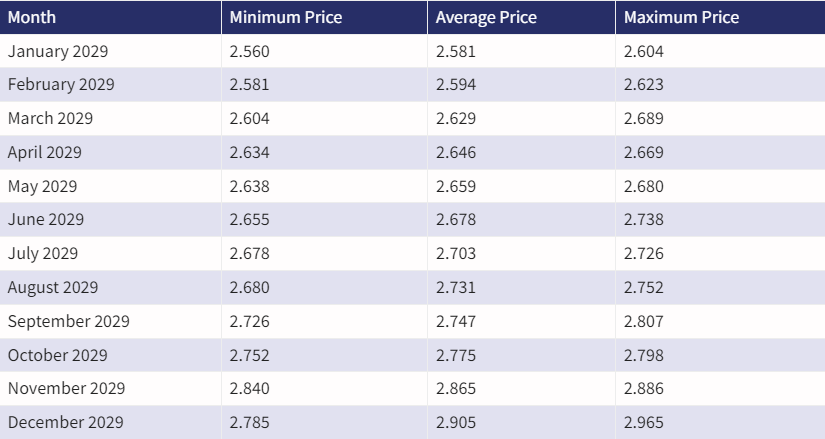 The cryptocurrency market experienced high stability due to the holding activities of early investors so as not to lose future gains in the price of their assets. In 2030, XRP prices could rise to $3.542. 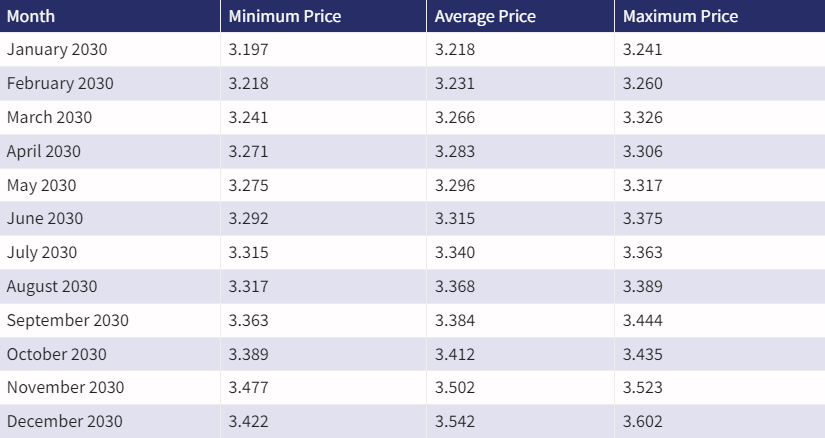 According to our long-term XRP price estimate, XRP prices could reach a new all-time high this year. If the current growth rate continues, we could anticipate an average price of $8 by 2040. If the market turns bullish, the price of XRP could go up beyond what we predicted for 2040.

As mentioned, it may reach above $3 if investors have decided that XRP is a good investment along with mainstream cryptocurrencies.