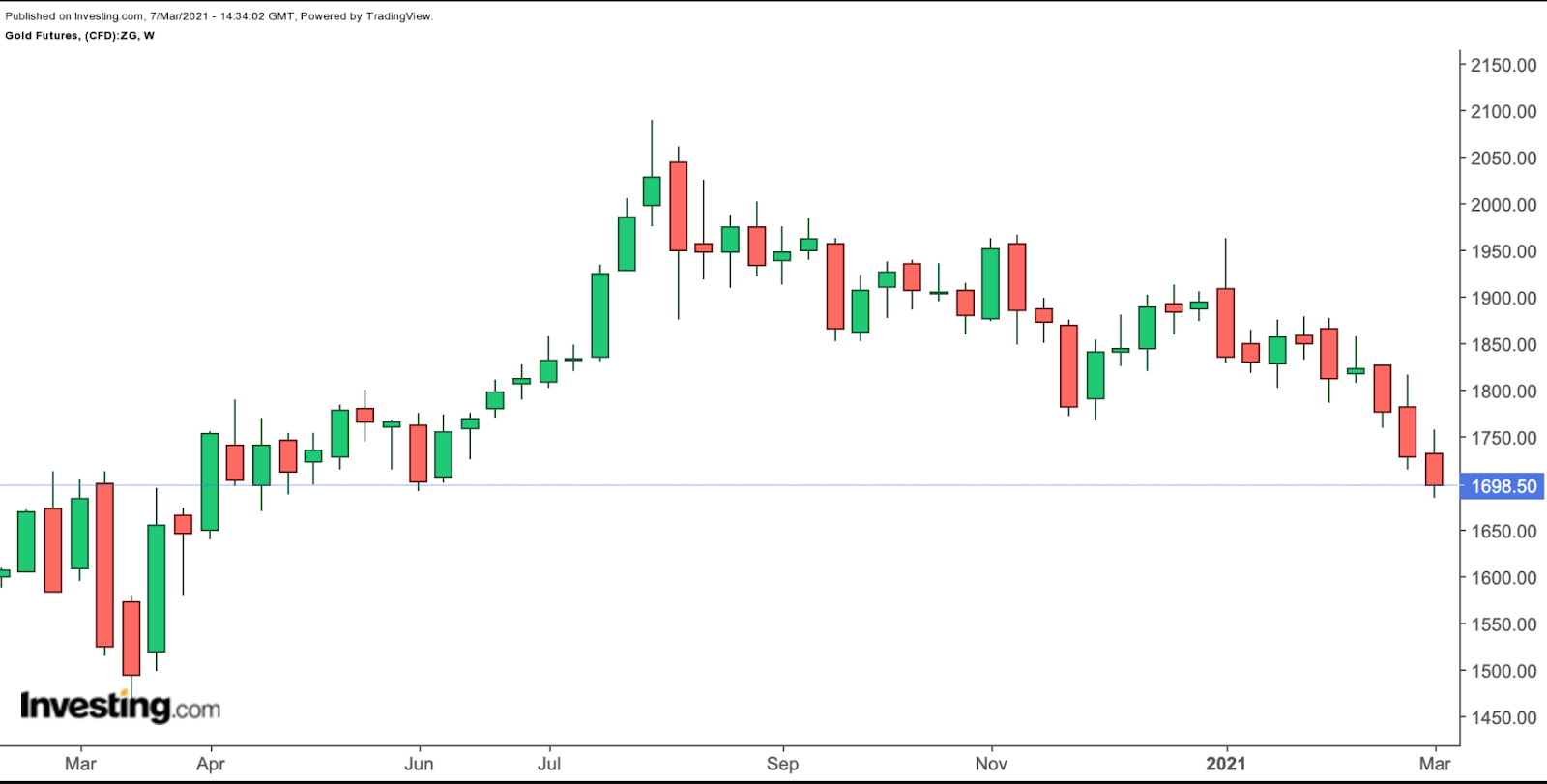 Given the declines seen in recent weeks, market participants wonder whether March could be an opportune time to invest in the shiny metal. Therefore, today's article discusses the drivers behind the gold price and introduces an exchange-traded fund (ETF) for gold bulls who might bet on a reversal in the months ahead.

Factors That Influence The Price Of Gold

Humans have valued gold highly for centuries, and the commodity has acted as a store of wealth as well as a medium of exchange. In times of economic uncertainty and heightened volatility, it is regarded as a safe haven.

The performance of stocks is typically negatively correlated to gold. The shiny metal tends to do well when there is fear in equity markets. However, since March 2020, that relationship has not fully held up. In recent days, many stocks have been volatile and have come under pressure. The following chart shows the decline in the S&P 500 since mid-February. 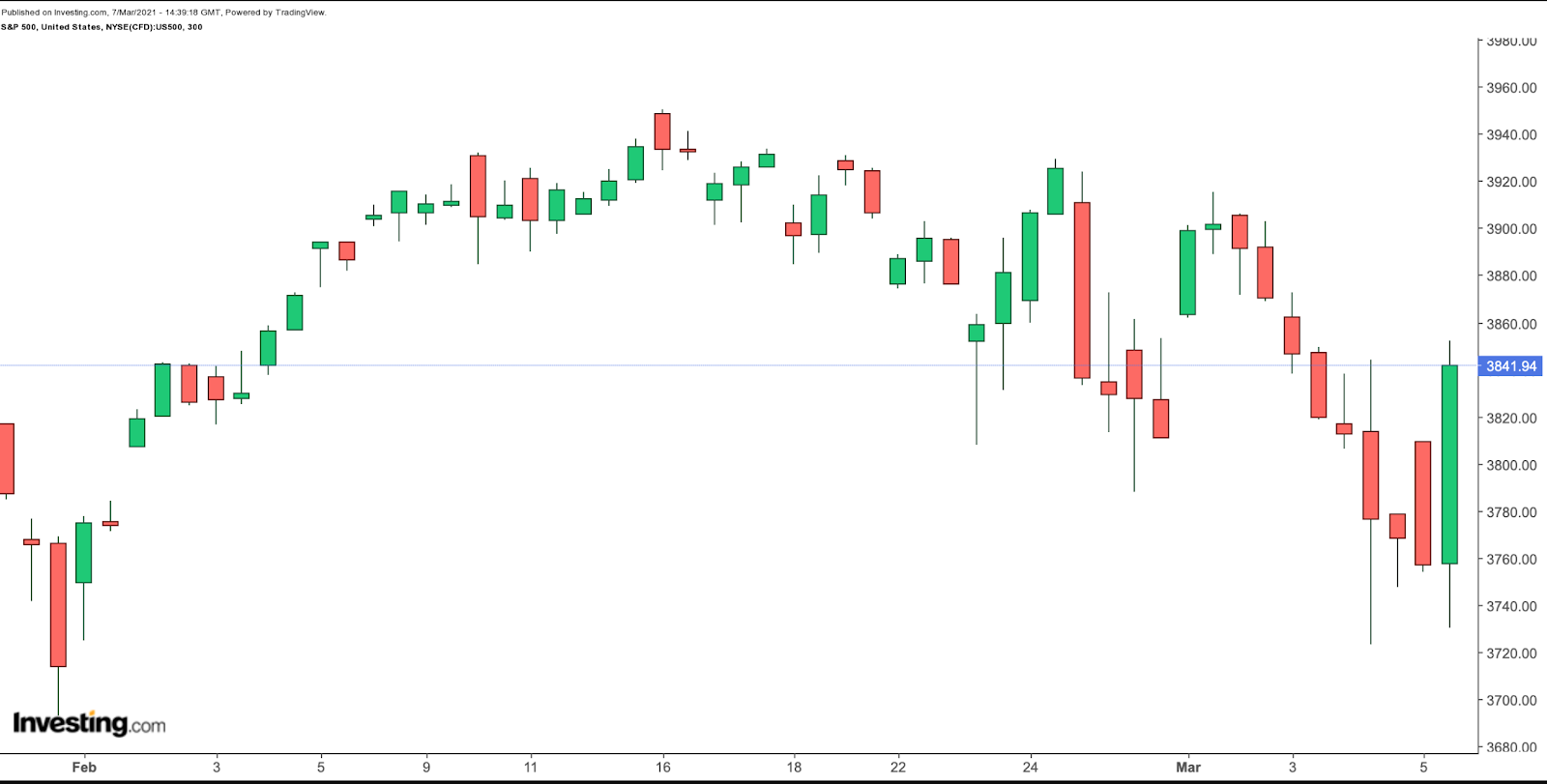 However, over the past month, the weakness in the price of gold has continued, too. Nonetheless, the coming weeks might indeed show an inverse relationship between broader indices and gold.

At present, many analysts concur that macroeconomic conditions appear likely to support the price of gold. Tailwinds could include continued support from central banks, especially the Federal Reserve, and mountains of government debt. The Fed's monetary stimulus is likely to stay with us in the near-term, supporting the price of gold. Similarly, the fiscal stimulus by the administration is another positive catalyst.

However, given the large-scale vaccination efforts stateside, if life were to return to normal sooner rather than later, then the bear case for gold could pick up steam, and the demand for the precious metal could easily decline. But if the US economy were to overheat rapidly, then inflation could easily edge higher, driving up the gold price.

We also have to remember that gold is inversely related to the value of the US dollar . Therefore, investors would also need to pay attention to the US Dollar Index , which measures the value of the greenback relative to a basket of six currencies from some of the most significant US trading partners. During most of 2020, the index has declined steadily. However, 2021 has seen it move up. If the bullish move in the greenback were to continue, gold could edge lower.

Finally, seasonality could be another factor considered by some investors. Proponents of the seasonality effect point out that the return and volatility of certain assets tend to exhibit recurring patterns at certain times of the year.

For instance, research by Dirk G. Baur of the University of Western Australia highlights:

"September and November are the only months with positive and statistically significant gold price changes. This "autumn effect" holds unconditionally and conditional on several risk factors... [T]he anomaly can be explained with hedging demand by investors in anticipation of the "Halloween effect" in the stock market, wedding season gold jewelry demand in India and negative investor sentiment due to shorter daylight time."

Yet another research concludes that positive monthly returns were mostly seen in August, September, February, and April. Looking at a longer-term gold chart would show that no two years are potentially alike. 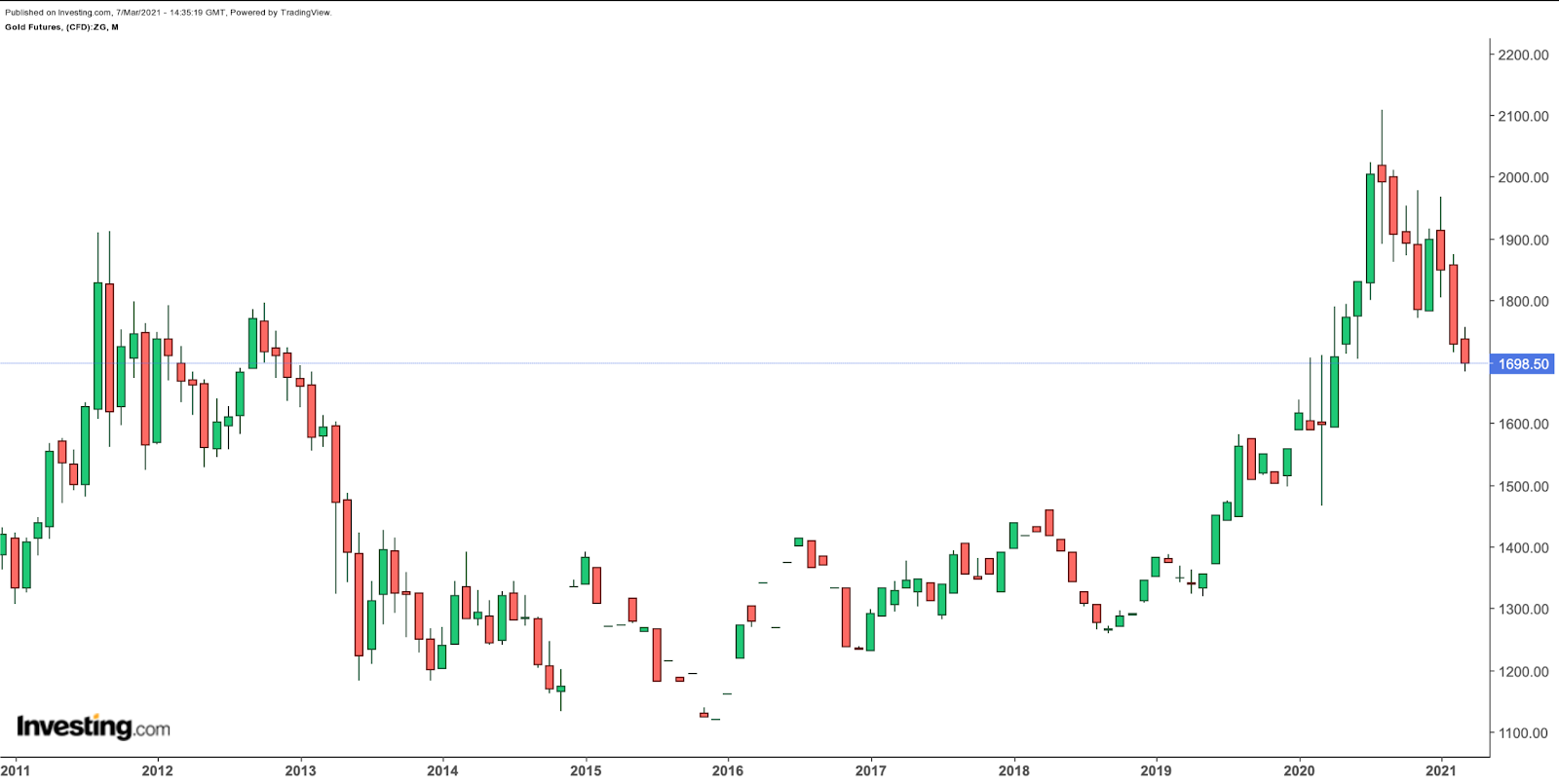 Therefore, we believe it would be hard to form an expectation about the price of gold in 2021 simply by analyzing the monthly returns in 2020. Against that backdrop, here’s our fund for today.

The SPDR® Gold Shares Fund (NYSE: GLD ) holds gold bullion, the sole asset of the ETF—in addition to some cash. The fund started trading in November 2004, and assets under management are over $58 billion. In recent weeks, the fund has posted regular outflows. 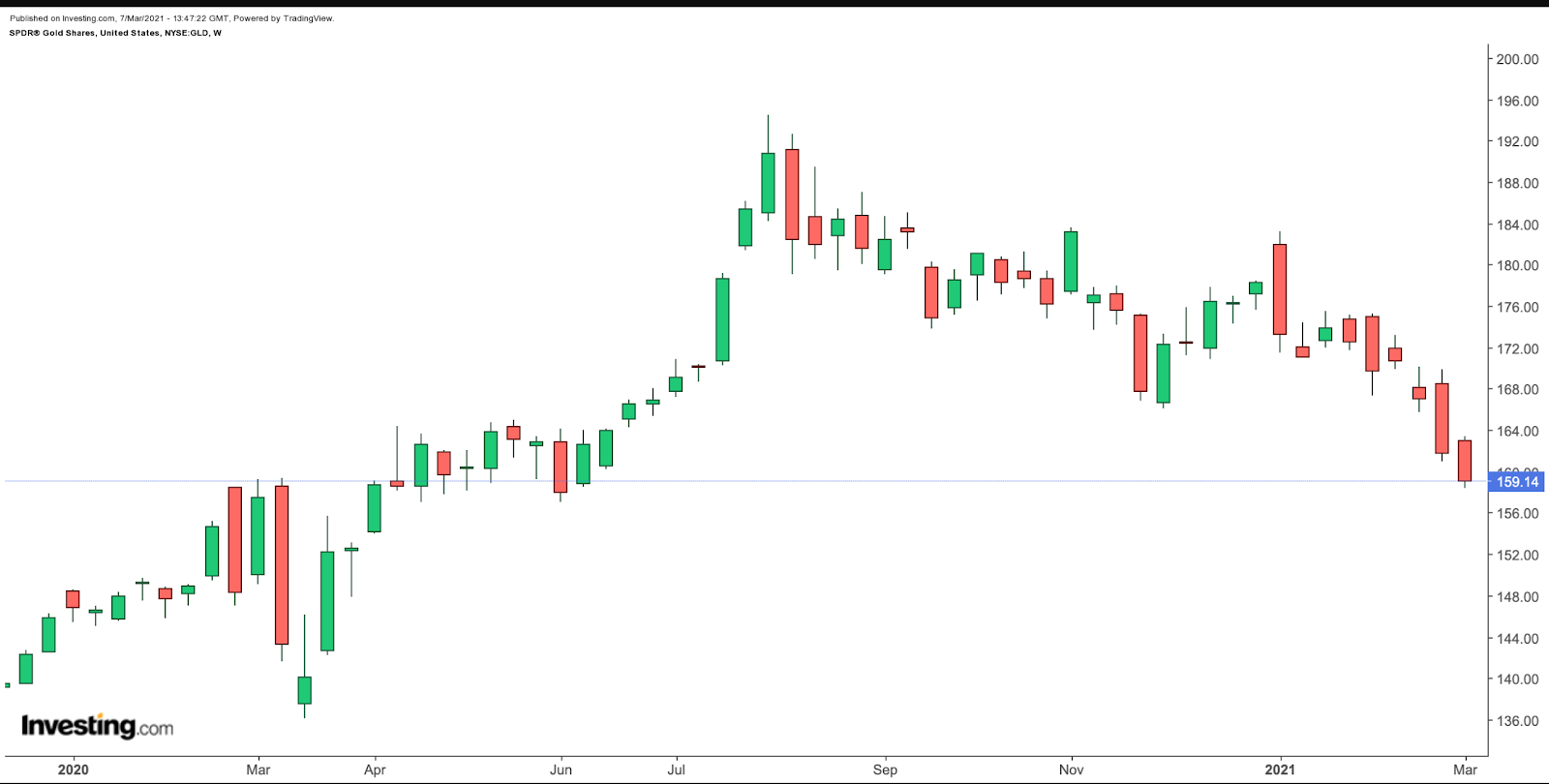 The $150-level is likely to act as support and the $165-level as resistance in the coming weeks. If bulls have the upper hand, then $170 may well be the next target. In March, we expect the metal to trade mostly between $150 and $160. Analysts are divided about the next move for 2021. Following a period of consolidation that could last weeks, we expect the next move to be up.

Although it is not possible to pick an exact bottom for the fund, those readers who are bullish on the metal could regard any further decline as an opportunity to buy into the price of GLD.

Our discussion has shown that many factors influence the price of gold. As a result, it not an easy asset to value. Short-term traders' interest in gold typically waxes and wanes. But for many long-term investors, gold will likely have an allure as a portfolio holding in 2021.

Financial advisors usually suggest allocating 5%-10% of an investment portfolio to precious metals, such as gold. In addition to buying a fund like GLD, holding the physical asset is one possibility.

Owning some gold through investing in miners could also be an alternative way to stay ahead of the curve. A bullish move in the commodity would translate into gains for mining stocks.

Several ETFs focus on gold miners. They include: