The news that Elon Musk, the world’s wealthiest individual, worth over $200 billion, bought a significant stake in Twitter (NYSE: TWTR ) caused the stock of the social media platform to explode higher.

Musk is an innovator. He made millions off of PayPal (NASDAQ: PYPL ), which he co-founded, and is making billions from Tesla (NASDAQ: TSLA ), the electric vehicle company he founded and of which he's the chief executive officer. He also owns SpaceX and the Boring Company, along with other businesses.

At first blush, Twitter may seem to be a more synergistic investment for media-focused billionaires like Jeff Bezos, who founded Amazon (NASDAQ: AMZN ) and owns the Washington Post, or Rupert Murdoch, the owner of Fox News (NASDAQ: FOX ) and its related companies. However, Musk has something in common with Twitter’s founder and former CEO, Jack Dorsey, which provides a different kind of synergy.

Both men have been huge supporters of cryptocurrencies. If the two work in tandem, including by using Dorsey's internet innovation, it could kick-start the next step in the evolution of the cryptocurrency revolution.

Elon Musk has never been shy about sharing his opinions and Twitter has been his preferred social media platform to do so. Last week's news that Musk had acquired over 9% of TWTR’s outstanding shares and was planning to take a seat on the company's board of directors caused the stock to vault higher. 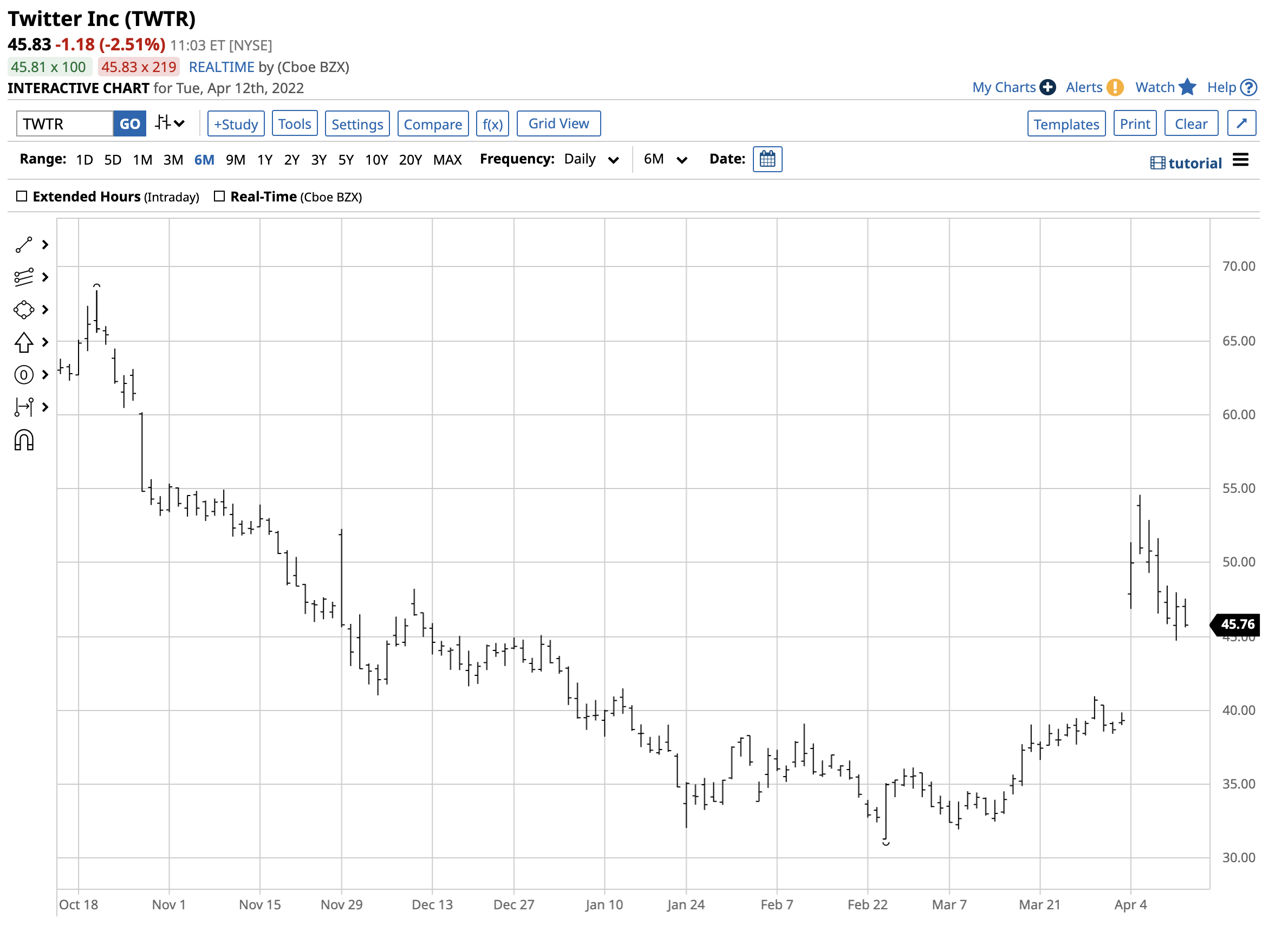 And just to keep the market guessing, it seemed, on Sunday, Musk backtracked on his decision to take a seat on Twitter's board. However, the move has eliminated a regulatory limit of a 14.9% ownership stake and opened the potential for a hostile takeover of the company by Musk. At the $44.48 level, TWTR’s market cap was near the $34 billion level, easily affordable for the billionaire with assets over $200 billion.

Jack Dorsey is the co-founder of Twitter as well as the founder and CEO of Block (NYSE: SQ ). Last year, Dorsey relinquished his CEO role at TWTR to concentrate on SQ, his payments company. Block has been working on a cryptocurrency wallet.

On the news of Musk’s investment in TWTR, Jack Dorsey said:

“I’m really happy Elon is joining the Twitter board! He cares deeply about our world and Twitter’s role in it. Parag (TWTR’s current CEO) and Elon both lead with their hearts, and they will be an incredible team.”

“I’m excited to share that we’re appointing @elonmusk to our board! Through conversations with Elon in recent weeks, it became clear to us that he would bring great value to our Board.”

Musk has been critical of TWTR, suggesting the social media platform fails to “adhere to free speech principles.”

After Musk decided not to take a seat on the board of directors, Agrawal, TWTR’s CEO, told his staff:

“There will be distractions ahead; tune out the noise.”

Indeed, Musk hasn't kept quiet since his hefty stake in the company became known. Just recently he polled his 81 million followers on Twitter, asking such things as if they believed the company should “Delete the w in Twitter;” if the company’s San Francisco headquarters should be "turned into a homeless shelter since no one shows up anyway,” and asked, “Is Twitter dying?”

These tweets are hardly the sign of a cooperative team player. But it does indicate that Musk is someone who likes to stir things up.

Musk is a crypto devotee

Even before he disclosed a stake in Twitter, Musk routinely used the platform to comment on the cryptocurrency markets. Dogecoin (DOGE), once a digital currency joke, has been one of his favorite topics even as it provided validity for the token.

During March 2022, Musk tweeted that he owns Bitcoin (BTC), Ethereum (ETH) and Dogecoin and is not planning to sell those cryptocurrencies. His tweets have caused volatility in the cryptocurrency markets, and his support tends to lift their prices.

“If the price of Bitcoin goes down, I lose money. I might pump, but I don’t dump. I definitely do not believe in getting the price higher and selling or anything like that.”

Musk is a character who has been a nightmare for regulators over the past years. His interest in TWTR and the potential for a hostile takeover will likely create lots of drama for the company.

His ardor for digital currencies and his habit of using Twitter to, among other topics, amplify the value of cryptos should ensure that regulators are keeping a close eye on the situation even as investors are paying attention to Musk's asset calls.

“If I were not at Square or Twitter, I’d be working on Bitcoin.”

His enthusiasm for the burgeoning asset class is equal to Musk's. Late last year Dorsey changed Square’s name to Block and left Twitter because of his passion for the cryptocurrency asset class.

Dorsey believes Bitcoin will eventually replace the US dollar . He also thinks it will “unite a deeply divided country (and eventually world).”

Eccentric and brilliant billionaires can address custody, security, and acceptability for the asset class

Elon Musk and Jack Dorsey are not ordinary business tycoons. Significantly, they also share some other things in common. They have billions at their disposal, have created companies that changed the world, are crypto devotees and have massive egos.

They're both iconoclasts as well: Musk is not above smoking pot live on a podcast nor displaying the effort via Twitter. And Dorsey has transformed himself from a run-of-the-mill young tech geek to what some have described as a bohemian wizard.

Working together, these two brilliant men could potentially solve the custody, security, and acceptability issues that now plague the cryptocurrency asset class. Moreover, by cooperating they could further the evolution of social media, addressing the many roadblocks created over the past years.

Alternatively, they may face off in an epic battle for control of Twitter, creating a clash of titanic egos that could drive volatility in TWTR shares without any real breakthroughs for a greater good.

Musk and Dorsey make quite a pair, but the potential for an exponential result comes alongside the possibility of destructive risk. It could be all of this is a giant joke to the two of them, though investors are waiting on tenterhooks to find out.