After having four days of green, the US market had a down day yesterday. As Paul noted on Twitter yesterday, "they aren't supposed to go up *every day*". Even though markets had a down day, the Rand has continued to strengthen and the price of oil has remained above $40 a barrel.

At a press conference yesterday the ECB indicated that they will increase their massive bond buying program. They also noted that there is further firepower at hand if it is needed. Even with all the extra monetary stimulus, they forecast that EU inflation will only be 1.3% in 2022, still below their target range of 1.5% - 2.0%. Having such low inflation is the reason why central banks can intervene in the big way that they have.

Estonia is a country with a population of 1.3 million people and is situated on the Baltic Sea in Eastern Europe. When I think of Estonia, I think of forests, log cabins and skiing. There are no famous tourist landmarks, so it is a country that I think most people will struggle to pinpoint on a map?

Estonia is well known for being very technologically advanced. The country pushed hard over the years to move their society online, and in 2020 it has been paying dividends. There are only three things that people are required to do in person, marriage, divorce and buying property. Even voting can be done online. 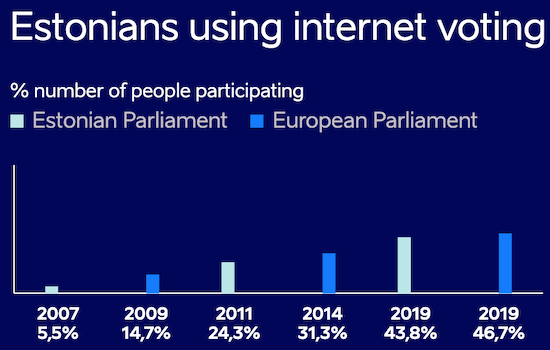 The government has a policy that it should only ever ask you once for a specific piece of information. Imagine that! Having a population of only 1.3 million people does make it easier to be a digital country but we should not take anything away from the nation. They used to be part of the USSR, where communism decimated their economy. It goes to show that you don't need to be a wealthy nation to adopt technology.

With the current need for social distancing, I'm sure that many nations will start to look at the model adopted by Estonia and start to replicate some parts.

Yesterday, my colleague Paul wrote a fantastic piece about one of the biggest beneficiary of the Covid-19 pandemic, the video conferencing company Zoom . I'm here to complement that piece with an infographic showing Zoom's rapid, mind-bending revenue growth over the past two financial years.

"We were humbled by the accelerated adoption of the Zoom platform around the globe in Q1," said Eric S. Yuan , Founder and Chief Executive Officer of Zoom in the company's earnings release for the three months ended April 30. "The COVID-19 crisis has driven higher demand for distributed, face-to-face interactions and collaboration using Zoom. Use cases have grown rapidly as people integrated Zoom into their work, learning, and personal lives."

The infographic below shows steady revenue growth until the end of the 2020 financial year - Zoom's financial year end is 31 January. The revenue print jumps massively for Q1 2021 and the company expects another big jump in Q2 as most of the world is still working from home.

Data out today includes a South African business confidence read released at 11:30. Then the big one for global markets is US unemployment data . The expectation is for their unemployment rate to reach 20% for May. Wow. Remember, even though the number looks dire, the market is expecting it. The Rand is at $/R 16.88 this morning.