Yesterday, US markets endured another very volatile trading day and ended down. The S&P 500 staged a lunch-time recovery, turning green for a moment and erasing a 3% drop but then slid further towards the close, to its lowest point since October 2021. The broad index is down 9% year-to-date. This topsy-turvy month is the worst since the Covid slump in March 2020.

In company news, General Electric (NYSE: GE ) fell 6% after reporting a loss of $3.8 billion for the fourth quarter. Paul has an interesting take on GE below. Elsewhere, Elon Musk will unveil Tesla (NASDAQ: TSLA )'s product roadmap during their earnings call tonight. It will be interesting to get an update on the Cybertruck production rollout.

This was also J&J's full-year results. For perspective, they had sales of $93.7 billion for the year, up 13.6% versus 2020. $52 billion of that came from pharmaceuticals which grew 14%; $27 billion came from medical devices which was up 18%; and $14.6 billion (16% of sales) came from the consumer division which only grew 4%. That explains why they are spinning the consumer division out.

The share is up 150% in the last 10 years. In the last five years, it is up 33%. This one is slow and steady, and we are happy to hold them in Vestact-recommended portfolios. These returns exclude the very solid dividend yield that averages around 3% per annum. J&J has famously increased its dividend for 60 consecutive years.

More importantly however, J&J is flat for the year to date while the Nasdaq is down 14%. In our tech-heavy Vestact portfolios, J&J is a very stable anchor whilst dishing out much-needed cash every quarter. 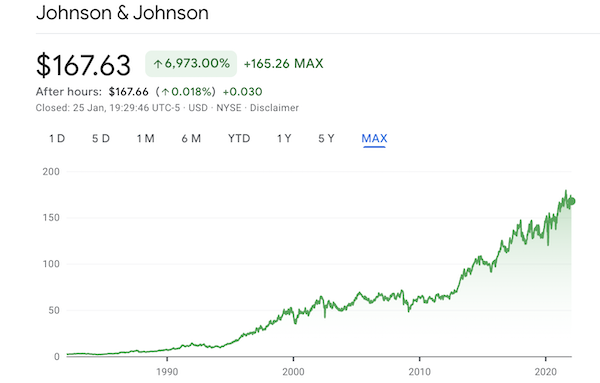 We are pretty hardened optimists here at Vestact, but we still believe in stock picking. In other words, we are resolute holders of shares in quality companies, but we believe that you have to own the right ones. We spend a lot of time on that, wondering about the trends that will develop in the years ahead.

Consider the case of General Electric (NYSE: GE ) (GE), a company that we owned in client portfolios a decade ago. We bought them because they were a major player in infrastructure development, and in the early 2000s, there was a lot of that going on, especially in China. We sold them and moved on when the commodities boom seemed to have run its course.

The chart below shows the last 25 years at GE, including a big slump in 2008-09, during the so-called 'global financial crisis'. As you can see from the chart below, we entered that GE at a good time, and exited well, 13 years later.

On Monday, Meta (Facebook) (NASDAQ: FB ) announced that they are building the world's fastest AI supercomputer. It is already operational, but the engineers will continue to add scale to the machine over the next six months.

Facebook says the machine will be used to create better AI models, allowing their systems to work better. Central to the project is using the supercomputer to develop the required tools to build the metaverse. I can't tell you exactly what that means. I guess having all of us putting on VR goggles and living in a digital world comes with some unique challenges. Facebook also notes that having better AI technology will ease the continual fight to remove harmful content from their platforms.

To learn, AI supercomputers need vast troves of data to trawl through. The more data they have access to, the better their learning. Luckily, in this case, Facebook has one of the world's most extensive databases. They have over a billion users, who they know better than the users know themselves. I think it was in 2016 when Facebook had a test you could take to show that the platform knew you better than your spouse.

The FAMGA stocks are what we see as core holdings here at Vestact. These are big blue-chip technology companies with a high return on investment, run by competent management and they are printing cash like no other businesses in history. Most of the time, they trade at a premium because they are premium businesses.

Well, if you're in the position to buy this dip and you were wondering where the sales were, look no further. The recent dip provides a great opportunity to buy these quality businesses at a 'fair' price. I say fair because it's super hard to buy them 'cheap'. Arguably, Amazon (NASDAQ: AMZN ) does look pretty cheap on a relative basis as compared to its peers.

With Facebook and Google changing their names to Meta and Alphabet (NASDAQ: GOOGL ), the new acronym is no longer FAMGA but AMAMA. I like it a lot! The infographic below shows how far each stock in the AMAMA index has dropped from their all-time highs. I hope this helps you make an informed decision on what to add next to your portfolio. The Fed monetary policy decision is out today, and this should provide a tapering roadmap. Jay Powell will host a post-meeting press conference at around 9pm South African time.

US futures are up in early trade, taking a breather from yesterday's chaos. The Rand is trading at R15.24 against the US Dollar.

It's the 26th of January. On this day back in 1905, a 3 106-carat diamond was discovered in Cullinan, near Pretoria. So you see, good things happen to those that keep their eyes open.